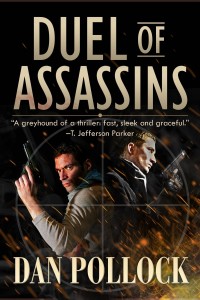 The Cossack and the Cowboy: two highly trained killers… ex-comrades turned sworn enemies… the hunter and the hunted… on a collision course with each other and with history:

High above a mountainside in Austria, a Soviet citizen with an American-sounding name sails beneath a hang glider, taking one more daring risk in a life full of risks. What Marcus Jolly doesn’t know is that an old man in Siberia–facing his moment of death–has called on him for the most dangerous mission of his career.

In Washington, a man named Taras Arensky–one of the most highly trained killers in the world–is called to the White House to take on an extraordinary mission: protect the Soviet president from assassination.

Once Taras Arensky and Marcus Jolly had been the best of friends. Now they are to meet again on the moonlit cliffs of Yalta, at the Soviet President’s summer retreat. It is the opening move of a duel that will be fought across Europe, enmeshing a beautiful woman and climaxing at an international summit in Potsdam. It will call on all the deadly skills and cunning the two men have acquired over a lifetime.

DUEL OF ASSASSINS is available from Amazon.

Dan Pollock was born in New York City to a family of writers and grew up in Laguna Beach, California. A former syndicate editor with the Los Angeles Times, Pollock is the author of four thriller novels in addition to Duel of Assassins–Lair of the Fox, Orinoco (originally published as Pursuit Into Darkness), The Running Boy–and a specially commissioned “logistics” thriller, Precipice.