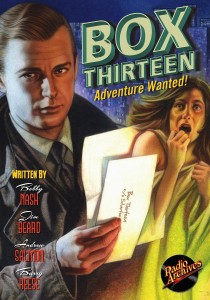 Adventure wanted!Will go anywhere!Do anything!Write Box Thirteen c/o Star-Times!When author Dan Holiday opens Box Thirteen, he never knows what adventure awaits him. A former newspaperman turned novelist, Holiday crafts the plots for his books by living them. Spurred into action by letters from his readers, Dan Holiday’s adventures ranged from the outrageous to the dangerous. Whatever the case, Dan Holiday is sure to find adventure.Based on the 1948-49 radio drama starring Alan Ladd, this collection includes 6 all-new Box Thirteen tales that carry on the action-packed tradition of the originals.In “The Mystery of the Menacing Manuscript” by Bobby Nash, a surprise invitation sends Dan Holiday on a mystery writer’s weekend retreat filled with treachery, deceit, and murder.In “The Horror of the Plague Doctor” by Barry Reese, a worried investor’s letter puts Dan Holiday in the crosshairs of a death doctor’s nefarious plot.

In “The Out Of This World Affair” by Bobby Nash, a cryptic message sends Dan Holiday scurrying to find the truth about Citizen X’s extraterrestrial discovery before men in black suits catch them both.In “Room 13” by Jim Beard, a request for aid puts Dan Holiday on a collision course with mobsters, a mechanical man, and a scientist who wants to harness the author’s brainwaves.In “The Game’s afoot, Mr. Holiday” by Bobby Nash, a killer gives Dan Holiday a chance to stop him before he murders his next victim. Can he decipher the killer’s clues in time?In “Kaleidoscope” by Andrew Salmon, a frantic letter from a troubled wife sends Dan Holiday straight into a murder investigation where he’s the chief suspect.Dan Holiday’s new adventures spring to life at adventure’s favorite address, Box Thirteen.

RadioArchives.com has released the ebook edition of BOX THIRTEEN – ADVENTURE WANTED. An audiobook will be released on May 9th with a paperback release to follow.Stories in this new anthology are written by Bobby Nash, Jim Beard, Andrew Salmon, and Barry Reese. This new collection of stories is based on Alan Ladd’s popular 1948-49 radio show. Box Thirteen is performed by Nick Santa Maria, an actor with an incredible range of voices. Rumor has it Nick has been practicing his Alan Ladd impersonation. Douglas Klauba provides the cover.

About Bobby Nash:From his secret lair in the wilds of Bethlehem, Georgia, 2013 Pulp Ark Award Winning Best Author, Bobby Nash writes a little bit of everything including novels, comic books, short prose, graphic novels, screenplays, media tie-ins, and more.Between writing deadlines, Bobby is an actor and extra in movies and television, including appearances in Deviant Pictures’ Fat Chance, FOX’s The Following, USA’s Neil, Inc., AMC’s Halt and Catch Fire, and more. He is also the co-host of the Earth Station One podcast (www.esopodcast.com) and a member of the International Association of Media Tie-in Writers and International Thriller Writers.Bobby was named Best Author in the 2013 Pulp Ark Awards, his first professional writing award. Rick Ruby, a character co-created by Bobby and author Sean Taylor also snagged a Pulp Ark Award for Best New Pulp Character of 2013. Bobby has also been nominated for the 2014 New Pulp Awards and Pulp Factory Awards for his work.For more information on Bobby Nash please visit him at www.bobbynash.com, www.facebook.com/AuthorBobbyNash, and www.twitter.com/bobbynash, among other places across the web.Radio Archives’ Box Thirteen – Adventure Wanted also features stories by Jim Beard, Andrew Salmon, and Barry Reese.

Hard As You Can by Laura Kaye