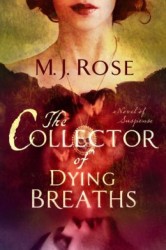 A former media maven, MJ Rose left the advertising arena to write fiction in the late 90s. It wasn’t long before she found herself back in the ad business when she realized marketing is a required activity for authors.

Her novels combine multiple genres to create an eclectic collection of breathtaking heroines, mysterious heroes, and a deep understanding of history. She takes the reader on a passionate, dangerous journey through time with a writing style that is riveting.  The release of her newest novel, THE COLLECTOR OF DYING BREATHS, comes in a hail of critical acclaim.

I was able to catch up with her for a look at the details about being an author, running a business, and how she created the character of Rene’ le Florentine while portraying the magical court of Catherine de Medici.

How much of THE COLLECTOR OF DYING BREATHS is based on historical events?

As with most of my work, there is a lot of fact mixed in with this fictional tale.

My story starts at the real life Officina Profumo–Farmaceutica di Santa Maria Novella, one of the world’s oldest pharmacies, which was founded in 1221 in Florence by the Dominican Friars who made herbal remedies and potions. The first “eau de Cologne” has been attributed to the pharmacy’s 1500s citrus and bergamot scented water created for Catherine de Medici.

René le Florentin, my main character in the past story, was indeed an apprentice at the monastery and there created scents and creams for the young Catherine de Medici. When the fourteen-year-old Duchessina traveled to France to marry the prince, she took René with her. He and Catherine are credited with bringing perfume to their newly adopted country.

I used René’s perfume store in Paris and along with perfume he was credited with inventing creative poisons like the ones in the book, which his queen and her subjects used on their enemies.

I stayed true to Catherine de Medici, her aspirations, issues, and superstitions, family as well as her reliance on the astrologer Cosimo Ruggieri and René le Florentin.

The history of perfume and the fragrance industry past and present is based on research and while here is no Phoenix Foundation in New York City or anywhere, the work done there by Dr. Malachai Samuels was inspired by work done at the University of Virginia Medical Center by Dr. Ian Stevenson, who studied children with past-life memories for more than thirty years. Dr. Bruce Greyson and Dr. Jim Tucker, a child psychiatrist, continue Ian Stevenson’s work today.

As for the theory of the dying breaths: We don’t know where this concept originated or if anyone in the Renaissance suspected such a thing was possible. But it’s not a far stretch from the well-documented and centuries-old alchemical search for immortality to the breath concept.  And we know that among others Henry Ford and Thomas Edison believed in the theory—Edison’s dying breath was saved and is in his museum.

The premise of THE COLLECTOR OF DYING BREATHS is fascinating—a perfumer who can reanimate the dead. Your novels seem to border the mysterious and fantastical. Do you ever find challenges in marketing across more than one genre?

Always always always. It’s been the most wonderful thing about my career that I’ve had publishers who have bought me despite how tough it is to market my books since they fit in no niche.

Your mysteries are traditionally complex with many layers of character development, resulting in a mystery that can stump even the most radical fan of mysteries. How do you plot your novels so you’re able to retain the element of surprise? Any advice on plotting?

I wish I did have advice—I’d use it. Every book is hard for me and I always feel like I’m starting from scratch and know nothing about plotting or character. What I do is write the book I want to read. I know the beginning of the journey and I have a rough idea of where I want to go but I really let the characters show me the way.

Tell us about your journey to publication

I had an agent and two finished and unsold novels. Publishers had been really excited about them but ultimately too uncomfortable with my genre-bending writing to bite. (See your previous question.)

But I was in advertising and didn’t understand their problem. Anything can be marketed if there’s an audience for it. So I decided to go online and do a marketing test for my novel—get some data and then my agent could take my plan and approach to one of those publishers and show them how to market my work.

I figured I could print up a few copies and offer an electronic download on line.

The only place to sell the electronic book was from my own website. And the only place to direct sales of the print book was to Amazon—they’d just started the Advantage program for anyone with a book, an ISBN, and a dream.

I didn’t think I was doing anything terrible. It was a marketing experiment. But my agent said I was self-publishing and that it would end my career before it began. She was very unhappy with me and we split over my decision.

That seemed absurd. I had so many friends who were painters, photographers, sculptors and artists and Indy filmmakers—individuals all who operated creatively and on their own. I didn’t see what I was doing as being very different.

So I printed up the books and set up the website with the electronic books and started the different marketing efforts.

Six months after I started my online test, I’d sold almost 3,000 copies and, after I’d started my online marketing test LIP SERVICE went on to become the first self-published book and the first ebook discovered online (at Amazon) to go on to be traditionally published.

What is something that may surprise your fans about you or your writing process?

I write my first drafts in hand with a fountain pen with green ink in lined journals.

THE SECRET WITCH OF RUE DRAGON—for publication in the spring of 2015.

Can you tell us a little about AuthorBuzz—the first marketing company for authors?

So many people are out there seeing us as consumers and making crazy promises and taking stupid amounts of money from us.

I started AuthorBuzz so authors would have someone they could trust to help them figure out ways to give their work a push—now we are used by every major, and many smaller—publishers during the course of the year, but our main focus is still authors.

In one sentence, what is your best advice for new authors?

Writing is an art and publishing is a business and often a very broken business so write because you love writing, and for no other reason.

M.J. Rose grew up in New York City mostly in the labyrinthine galleries of the Metropolitan Museum, the dark tunnels and lush gardens of Central Park and reading her mother’s favorite books before she was allowed. She believes mystery and magic are all around us but we are too often too busy to notice… Books that exaggerate mystery and magic draw attention to it and remind us to look for it and revel in it.

Rose is one of the founding board members of ITW and currently serves as co-president. She is also the founder of the first marketing company for authors — AuthorBuzz.com