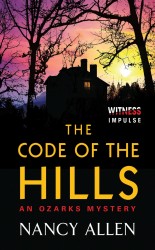 To get to the truth, she’ll have to break the code of the hills.

THE CODE OF THE HILLS is a powerful legal thriller from Nancy Allen, who practiced law for fifteen years, prosecuting over thirty jury trials, including murder and sexual offenses. It tells the story of ambitious Missouri prosecutor Elsie Arnold who anticipates a huge career boost when appointed to prosecute a high-profile case of incest. But the case soon begins to go sour. The star witness has gone missing; the three girls are reluctant to talk, their father terrorizes the courtroom; their tough-as-nails mother has ulterior motives, and mom’s new boyfriend raises suspicion that there’s more going on in this household than meets the eye. To make matters worse, Elsie begins to receive gruesome threats from religious extremists. With her job at stake, her personal life is taking a one-two punch. And the safety of three young girls hangs in the balance.

Nancy served as Assistant Missouri Attorney General and as Assistant Prosecutor in her native Ozarks (the second woman in Southwest Missouri to serve in that capacity). She is now an instructor of law at Missouri State University. THE CODE OF THE HILLS is her first novel.

Nancy, you must have a bundle of interesting cases and characters from your years as a prosecutor?

It can’t be denied: the hill country of the Ozarks has more than its share of colorful characters, and in the practice of criminal law, I was exposed to the underbelly of the community. And because I was the only woman in the prosecutor’s office when I joined the staff, I was assigned a great many sex cases. Handling those terrible offenses, I saw patterns that appear time and again: the generational history of abuse and the code of silence that surrounds it. It’s important that people see the challenges of prosecuting these cases from the inside, and I wanted to tell a story that would shed light on the subject.

Tell us a little about your protagonist Elsie Arnold. Is she very different from Nancy Allen?

Though she hails from the Bible Belt, Elsie is no pinnacle of virtue. She likes fast food and reality TV and drinks beer from the bottle—a lot of beer. She has feet of clay, and makes mistakes, in her personal and professional life. But although she stumbles, she is steadfastly dedicated to seeing justice done in her corner of the world. Is she like me? Nah. She’s a whole lot younger.

And why is this particular case “high profile”?

Sex cases perpetrated against children attract attention, because they are so horrific. It violates our most fundamental values, the belief that children should be protected from harm and that they should be safe within the family circle.

It sounds like the girls’ mom is almost as rough as the father, and then we have religious extremists. Can you tell us about the characters Elsie has to deal with?

The mother of the victims, Donita Taney, is a complex character. She loves her children, but fails to protect them. And though she professes a desire to change the pattern of abuse, she makes choices that place them in harm’s way. She is a victim of poverty and has experienced abuse, which may explain her behavior. But it doesn’t excuse it.

In the narrative, Elsie attracts negative attention from a religious group that rallies for the defendant for a variety of reasons, from family loyalty to anti-government sentiment and misogynistic patriarchal views. It creates another complication for her as she seeks to bring justice for the victims.

The blurb mentions the novel will appeal to fans of WINTER’S BONE and A KILLING IN THE HILLS. Does setting play a major role in the story?

Oh my, yes. The hill country of the Ozarks is markedly unchanged in some ways, and my fictional county seat reflects the area’s stubborn resistance to change.

Without giving the game away, can you tell us something about the arc that Elsie goes through in the novel?

While she sees her case through to the finish, she battles very real evidentiary problems that lawyers face with witnesses and physical evidence. But she must also contend with a combative, competitive boss, community protests, and her own personal weaknesses, including (but not limited to) her rotten taste in men.

Who are some of the legal storytellers you admire and would like to be compared to?

I respect and enjoy the work of Scott Turow, Alafair Burke, and John Grisham. And of course, the ultimate legal storyteller is Harper Lee—but I do not have the temerity to seek a comparison to her, honest to god.

What, if any, is the role for fiction in changing our attitudes to justice and the legal system?

Fiction can help demystify the legal system, by letting the reader understand how it works. It is a human machine, with all the virtues and failings of the people who run the system.

How would you like the justice system to be changed for the better?

It should work effectively for people of every demographical level.  And at this time, it doesn’t. The legal system performs differently for the underclass than it does for the rich.

How long has it taken you to write your first novel?

The first draft of the manuscript took six months. Four years of revision followed. That’s the hard lesson: that I had to keep at it, molding it into something better.

Do you have any quirky writing habits?

I write it in longhand first, on legal pads. Then I type it into the computer using two fingers. (Yes, it takes a while.)

And where will Elsie be heading in her next adventure—have you begun to write or plan the next in the series?

Elsie will be still be in the Missouri Ozarks, working hard at the McCown County Prosecutor’s Office. But she’s wrangling with a new case, with plenty of surprises to test her mettle.

Nancy Allen practiced law for 15 years, serving as Assistant Missouri Attorney General and as Assistant Prosecutor in her native Ozarks (the second woman in Southwest Missouri to serve in that capacity). During her years in prosecution, she tried over 30 jury trials, including murder and sexual offenses, and is now a law professor at Missouri State University. THE CODE OF THE HILLS is her first novel.