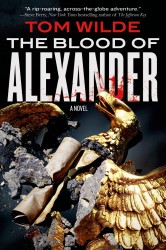 One of the first people who read my novel THE BLOOD OF ALEXANDER thought that the story really shows my love of history.

She was dead wrong.

It wasn’t love of the subject that drove me to write it, quite the contrary: It was my frustration with of all of the impenetrable mysteries that abound throughout human history. All those things we have lost, forgotten, or just plain destroyed that sparks my imagination while simultaneously vexing me and robbing me of sleep.

Plato’s Atlantis, was it real? What about the City of El Dorado? What became of the Lost Roman Legion? Or the Amber Room? Or the Roanoke Colony? Genghis Khan wanted to insure that his tomb remained undiscovered, and so far, he’s pulled that one off.

Whatever happened to Alexander the Great?

Then there’s all the horrible man-made disasters perpetrated throughout the ages that have robbed us of our past; the destruction of the Library of Alexandria and the House of Wisdom in Baghdad, along with the vast majority of the Yongle Encyclopedia of the Ming Dynasty and the Mayan Codices.

Gone. Because we burned them.

Today, there is an ongoing struggle to reclaim and rediscover our past. On one side are the true heroes, the historians, archeologists and researchers who labor to preserve our legacy as humans. While on the other side are the villains who would rob or destroy our heritage for mere profit or ideology.

As for me, I’m just a storyteller. All I can do is write tales of heroes and villains who become entwined with the secrets of our past, while adding in some present day horrors for good measure; modern day answers to Greek Fire and Archimedes’ Burning Mirror, and weave them together with our legends, theories, and whatever fragments of our past remain.

And hope that someday some real heroes can rediscover some of the long lost treasure that is our history.

Tom Wilde has worked as a government criminal investigator on cases that range from homicide to child abduction, and in that service traveled across the United States, as well as Germany, Romania and Mexico. Wilde is qualified as an instructor in police firearms and weaponless defense training.