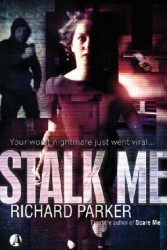 After being involved in a severe car accident and a vicious roadside assault, Beth Jordan wakes briefly to discover a coach party of students recording the aftermath with their phones.

Beth furiously attacks the crowd before being restrained and lapsing into a coma.

When she wakes in hospital, Beth is horrified when she’s told the video clips have been shared online and that millions of people around the world have now seen the incident.

The driver of the car she collided with has vanished without trace and Beth needs the recordings to help piece together exactly what happened.

But somebody is viciously murdering the owners of the clips and deleting them. What is concealed within those moments and can she find the survivors before the digital fragments of the event disappear forever?

STALK ME is available from Amazon, Amazon UK and Barnes & Noble.

Richard Parker’s debut novel, STOP ME, was nominated for a CWA Dagger Award.  His second stand alone, SCARE ME, has been snapped up by Hollywood studio, Relativity Media, by DALLAS BUYERS CLUB producer Robbie Brenner.  Star of PRISON BREAK and STOKER screenwriter, Wentworth Miller, has just completed the screenplay.

Before You by Jenna Bennett

Captivated (Book 2 in the Bruised Series) by Stacy-Deanne