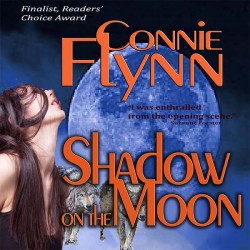 Some say she cares more about wolves than people and when State Troopers claim the wolf pack she’d helped introduce into the Arizona mountains is slaughtering people, she insists it isn’t true, and  races into a threatening snowstorm to save them. But an accident caused by a patch of icy road hurls her car into a massive snowbank.

Some say he prowls like a wolf and it might be true. That’s certainly why he found the unconscious female, one he soon realizes was sent to redeem him. She doesn’t see it that way, insists on leaving despite the raging snowstorm, and accuses him of keeping her prisoner.

Soon they both accept that fate has drawn them together and only an ancient ceremony can keep them safe, one conducted under the SHADOW OF THE MOON.

SHADOW OF THE MOON is available from Amazon.

Riviting read!
This is real suspense, crisp and fast paced, not for the faint of heart . . .
Assaults the senses with lush, earthy images . . .
Top-notch characters and supporting cast . . .

Award-winning, bestselling author Connie Flynn writes both long and short fiction and is published in multiple genres, including paranormal romance, romantic comedy, mystery and suspense, and contemporary fantasy/sci-fi. She lives in Arizona on a lush green park where she walks her dog and escapes the hot desert sun.