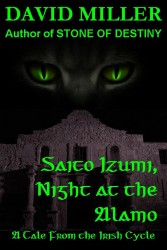 Finally, the untold, true story of what really happened the night the Alamo fell

On that fateful night of March the 6th, 1836, Saito Izumi, a centuries old vampire, tended to the sick and dying, chief among her charges; the legendary Colonel James Bowie.

But while General Santa Anna’s attack was no surprise, what swarmed over the walls and through the gates of the old mission was anything but expected. And what Saito learned that night about honor and duty would change her forever–if she lives through the night.

The fourth in a series of short stories featuring Saito Izumi

SAITO IZUMI NIGHT AT THE ALAMO is available from Amazon, Barnes & Noble and Kobo.

DAVID MILLER grew up in New York in the early ’70s watching Dark Shadows during the day, the Night Stalker at night, and the weekly Creature Feature movie on an old black & white RCA television set every Saturday night with his father. It’s no wonder as an adult he now writes stories with fantastical creatures, mystical happenings and occult goings-on, of worlds where anything can happen…and usually does.