I am often told that my top-secret clearance gives me a leg up in thriller writing. True, I won’t deny it, but a military clearance is not as big an advantage as you might think. Non-disclosure agreements and a general sense of operational security prevent me from relying on my professional past. As a writer, I am stripped of my background, forced into that blinding white space beyond my experience. I do, however, carry my training forward with me into the emptiness. Let me share with you the most important principle from my intelligence past that guides my novelist future:

It sounds like something you might hear on PBS, a tagline to the Reading Rainbow, but it describes a mindset that is vital to intelligence work. You don’t know what you don’t know is a reminder that an operative or analyst whose hunt is too focused on the evidence he already has is hamstrung right from the starting block. His senses and intellect are blinded to other trails that may ultimately lead to mission success. More directly, this principle helps professionals absorb open-source information and turn it into valuable intelligence. It can help you absorb the same information and turn it into your next great thriller. I am about to give you a list of practical applications, but if you forget everything else, just remember that you don’t know what you don’t know, and that mantra will guide you to the rest.

Application One: Expand your library, but not with books

I’ve heard it said that to write fiction, you must read fiction. Writing high-tech thrillers means reading a whole lot of non-fiction as well. And because you are trying to stay on the cutting edge of a wide breadth of topics, your starting point should be periodicals rather than books.

Non-fiction books tell you a great deal about a specific topic, usually a subset of a subset of a general field. In contrast, periodicals cover a range of subsets within their field. Since you don’t know what you don’t know, let periodicals lead you to specific subsets before you invest your time and treasure in books. Additionally, most books take an inordinately long time to get from research to print. By the time the Amazon Drone delivers it to your front door, the tech in that non-fiction book is old news. The publication life cycle of a periodical is far shorter, thus the tech is far newer. Periodicals, both print and online, keep you on the cutting edge.

Which periodicals? That is up to you, but let me get you started with examples from my own list along with the tricks for using them. 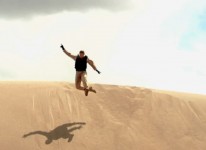 Department of Defense News—This is a broad internet-based news service, very broad. It incorporates just about every US government web publication that is remotely related to DoD. You can go to the website , but I find that site to be information overload. I suggest bypassing the front page and going straight to www.defense.gov/news/dodnews.aspx‎. There, you’ll find a link to the email subscription service, which includes a filter. That is the trick that intelligence professionals use for this very same service. The subscription service gives you a list of publications as well as a list of general subject areas and allows you to check the ones you want (including my favorites: tech, science, and ops). Instead of digging through the mountains of data on the home page, articles covering the general subjects you want will be delivered straight to your inbox, all for free.

Gun magazines—Writing a high-tech thriller is not just about the nanobots the heroine sends in to disarm the CIA security system. When the nanobots are done, if the weapon your heroine levels as she crosses the great seal is just a “submachine gun,” or a “pistol,” then you are failing your readers. The discerning techno-thriller reader wants to know that your heroine is carrying the latest and greatest in personal defense weaponry. A gun magazine subscription will keep you on top of small arms and show you what you didn’t even know that you didn’t know. You might even find a military sniper rifle that will become the centerpiece of your next thriller. By the way, if you are using nanobots, then the correct handgun for your heroine is the Beretta Nano (or perhaps a Desert Eagle if you’re big into contrast).

Defense Advanced Research Projects Agency (DARPA)—Yes, they exist, yes, I have played with them in the past, and yes, it was cool. DARPA used to be cagy and secretive. These days you can follow them on Twitter and Facebook, and I recommend that you do just that. They also have a YouTube channel, which is not regular enough to qualify as a video periodical, but it is definitely one to subscribe to. DARPA invented “out-of-the-box” thinking two decades before the phrase was coined by trendy management coaches. Keep up with DARPA and I guarantee they will show you things that you didn’t know you didn’t know.

Jane’s Defence Weekly, Small Wars Journal, MIT Technology Review, there are too many good ones to list them all. Pick a few and they’ll arrive at your doorstep or in your email and open your eyes to new possibilities as a high-tech thriller writer.

Have you attended ThrillerFest? If you have, you understand the value of industry conferences. If you haven’t, I highly recommend that you attend ThrillerFest IX in July and learn the value of industry conferences (“highly recommend” is military speak for “do it!”). Those writing high-tech thrillers should attend conferences outside the publishing industry as well. Conferences give you a chance to see the latest tech first hand, handle it, and talk to the folks that build it. This year attending a conference gave me the opportunity to play with a grenade launcher with “smart” munitions and talk to a guy that worked on the software that enabled the unmanned X-47B Pegasus to land on an aircraft carrier.

Once again, go to these conferences with an open mind. You don’t know what you don’t know, so keep your senses open. If you’re too focused on that sniper rifle you saw in the gun magazine, you might miss the solar powered micro-UAV that will identify your shooter’s target. It is also important to look outside the world of weaponry. Benign technologies like optics and acoustics lie at the heart of all good spy gear. Once again, you have to determine what conferences are important to you, but I’ll offer a couple of great examples. 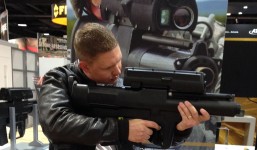 James tries out the XM25 smart grenade launcher at the AUSA Expo.

The Annual Meeting of the Association of the United States Army (AUSA)—That is a long name, but the civilian translation is “Awesome!” The October AUSA meeting in Washington, DC is the largest land force expo in the world, netting more than 20,000 visitors. Every defense contractor has a booth and major players will be on the floor. This year, Admiral McRaven, the commander of US Special Operations Command, passed through. No high-tech thriller writer should miss this one, particularly because of the low cost. Entry is free with a military ID card or with an AUSA membership, which is extremely inexpensive.

National Association of Broadcasters Show (NAB)—This expo doesn’t sound very spy-related, but it definitely is. NAB brings together every aspect of entertainment media technology. That means optics, acoustics, graphics and presentation. Are you beginning to see the applications? This year RED Digital Cinema unveiled a lightweight camera that can record at a resolution far above traditional high definition. Across the floor, Panasonic unveiled a micro-thin monitor that can translate that feed into an equally high-resolution display the size of a large window. Maybe your heroine catches her quarry but can’t get him out of his home country. She can use the tech you found at NAB to convince him he’s been whisked away and deposited at a black site in Morocco. NAB is not as inexpensive as the AUSA meeting, but it is still fairly cheap as conferences go and the location is hard to beat. Vegas, baby!

My favorite outgrowth of last year’s AUSA conference was continued contact with a friendly engineer that helped me with an academic paper on autonomous networked UAVs, and that brings me to the next application: seeking out experts and experiences.

Don’t take that advice the wrong way. What I mean is get out there and find experts in a variety of military and technical fields. The little details you learn will blow your mind and open up new avenues you never considered. Last year, had I not spoken to a forensic technician about enhancing digital photos, I would have never learned that there were methods for salvaging print photos that had been burned beyond recognition. That little tidbit and the knowledge I gained from further research played beautifully into my next thriller. Until that conversation, I didn’t know what I didn’t know.

James faces off with a Chinese general during Operation Valiant Shield in 2006.

Even better than learning from a professional contact’s experience is the personal experience you’ll gain from going out in the field with them. A simple police ride-along can teach you nuances that your cop friend never thought to tell you on the phone. Those opportunities arise once in a blue moon, though, so you’ll also want to create experiences of your own. Martial arts, tactical driving, the sky’s the limit in the thriller world. Every experience will teach you something you had no idea that you didn’t know. If I hadn’t taken a military free-fall course, I would never have known what happens to the guy who jumps out of the plane in front of you. He doesn’t float away. He just vanishes. Whoosh! He’s gone. Until I saw it happen, I didn’t know that I didn’t know how creepy that is.

Between periodicals arriving on your doorstep, acres of technology on expo floors, and volumes of nuances gained from contacts and personal experience, this method I’ve described creates a constant parade of new concepts. You’ll discover technology, techniques, and behavior that you didn’t know existed, and that is the point: you don’t know what you don’t know until you come across it. You’ll let most of the parade pass by, but a few items will lure you down side trails, and along those trails you’ll find the keys to your next great thriller.

James R. Hannibal has been shot at, locked up with surface to air missiles, and aided the capture of high value targets. He is the author of the Nick Baron covert ops series. When not writing, he continues to work for Uncle Sam in a position he cannot disclose. Find him on the Stealth Ops app for iPhone, iPad, or Android.