Carla Buckley is back with her second book INVISIBLE. Born in Washington D.C., Carla worked as an assistant press secretary for a U.S. Senator, an analyst for the Smithsonian, and a technical writer for a defense contractor. Her first book THE THINGS THAT KEEP US HERE was nominated for a Thriller award as a Best First novel and the Ohioana Book Award for fiction. For most any author the second book they write tends to be much harder since now they have deadlines looming. Carla was able to make the transition look effortlessly with INVISIBLE. When a reader discovers a new author it is a very exciting time for them because they now have a stable of books they can go back and read. However when you are able to follow an author from the beginning and watch them grow in their writing, it is even more fulfilling since the reader is able to follow along with the emotions of an author on their journey. Carla Buckley is an author that readers should jump on now and no better way to start then with INVISIBLE. We were able to ask Carla some questions, to better get some insight into her work and thought process.

Can you give us a behind the scenes look at your newest novel INVISIBLE?

In many ways, the biggest challenge I faced in writing INVISIBLE was coming up with the idea itself. I wanted to come up with a story that followed the same structure as my first book did: an average family in conflict forced to confront a deadly global crisis. My first book was about a flu pandemic, so I didn’t want to do another disease. I came up with and discarded several ideas and was beginning to panic. Then, one afternoon a friend of mine, who had recently attended a lecture at a think tank in DC, said, “I know something scary you could write about.” Her suggestion turned out to be perfect: here’s a real take-no-prisoners full-out assault on mankind, and the research is only beginning to turn up just how deadly it is.

Would you say that in INVISIBLE you made it more emotional?

Yes, I’d say so. Because the threat in INVISIBLE lies just beneath the surface, I had to rely on my characters’ emotions to drive the story. For example, it’s my protagonist’s inner turmoil that fuels her determination to find out what killed her sister, and may be killing others in her hometown. My other protagonist holds her emotions close, and it’s her chapter openings where she talks about her passion—the ocean and its creatures—that best reveal her feelings. These passages are among my favorite in the novel.

The beginning or the end, which do you feel has more impact on a reader, but which is harder to write for the author?

As an author, I always know how my stories are going to end, but I rarely know how they’re going to start. So much has to happen within those first few pages, and unless you hit just the right notes, you risk losing your readers. The hardest questions I face are, why does this story begin on this particular day, and why is it being told by this particular character? I agonize over my beginnings, and there’s a lot of muttering, stomping around, and chocolate involved.

As a reader, I think beginnings and endings are equally important. The first paragraph tells me whether or not I’m going to love a book, but it’s the last paragraph that stays with me the longest. A satisfying ending, not necessarily one that wraps everything up, leaves me glad for having invested my reading time (and makes me want to read more by the same author.)

Are thinking of writing a series with one main character, or will you stick to stand alones?

The short answer is that I think I’ll stick to stand-alones. That’s what I’m doing for the book I’m currently writing, and it’s the idea for the book I plan to write after that. But at some point, I want to revisit the characters of my first book. In particular, I’d like to take up the two years my family spent in northern Michigan, while the pandemic was still raging around them.

What was the biggest thing you have learned from your first book to now your second with INVISIBLE?

By far the biggest thing I learned in writing INVISIBLE was how to do so while under contract. I wasn’t as innocent about the industry my second time around, and I had many more voices to pay attention, not just my own voice telling me to sit down and write. I had other voices, too—those of my fellow debut authors encouraging and supporting me along the way—which is one of the reasons I’m such a keen advocate of writers communities, and ITW in particular.

What’s on your DVR right now?

Does Netflix count? Because I have just discovered WALKING DEAD. One of the benefits of discovering a series late is that you can watch a million episodes back to back. I’ve watched so many gory zombie hatchet scenes that I’m thinking I should write about a zombie apocalypse next. But I’d make them compassionate zombies, with multiple, internal conflicts. It wouldn’t just be about the blood. 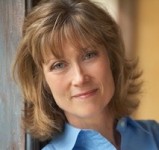 Carla Buckley lives in Columbus, Ohio, with her husband, an environmental scientist, and their three children. She is the author of Invisible and The Things That Keep Us Here, which was nominated for a Thriller Award as a best first novel and the Ohioana Book Award for fiction. She is currently at work on her next novel, which Bantam will publish.