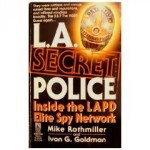 L.A. Secret Police. Inside the LAPD Elite Spy Division is a New York Times Bestseller. This incredible nonfiction book rips the lid off the LAPD and exposes the reader to its dark underbelly of corruption during the reign of Chief Daryl Gates. LA cops ruined lives and reputations, inflicted mindless brutality, committed murder and engaged in massive cover-ups. In Los Angeles, police corruption was much more than unmarked envelopes stuffed with cash. It was a total corruption of power. LAPD engaged in massive illegal spying. Its spying targets included politicians, movie stars, professional athletes, news reporters and anyone wielding power or those of interest to Daryl Gates. It all happened in Los Angeles. See why this book changed the LAPD and is required reading at many universities. As former Assistant United States Attorney Marvin Rudnick said, “Rothmiller was in a position to know. He did very sensitive work.”

L.A. SECRET POLICE. INSIDE THE LAPD ELITE SPY DIVISION is available from Amazon.

“Rothmiller was in a position to know. He did very sensitive work,” former Assistant United States Attorney Marvin Rudnick.

Mike Rothmiller is a New York Times Bestselling author, historian and former LAPD detective. He spent ten years with the LAPD including 5 years working undercover in the Organized Crime Intelligence Division. After leaving the LAPD he became a TV reporter, an award winning documentary producer and television host for ESPN, PBS and other international television markets. He’s written and produced over 25 television documentaries, numerous TV and radio ads and has authored movie scripts. His most recent nonfiction book holds the honor of being the only book in history to be endorsed by three living Presidents and General Norman Schwarzkopf. Mr. Rothmiller also invented the Imagination Zoo toy line and has served on numerous non-profit boards. Additionally, he’s been a corporate President/CEO and directed three divisions of Sony Electronics EMCS-America. Readers of his books include; three Presidents, former First Lady Laura Bush, the late Charlton Heston and Queen Elizabeth II. He’s been interviewed by media from over 25 countries and is quoted in numerous books and magazines.

League of Shadows by Ron Terpening