Deborah Reed, who writes under the pen name Audrey Braun, has followed up her critically acclaimed debut novel A SMALL FORTUNE  with FORTUNE’S DEADLY DESCENT, a mystery novel involving the same characters: Celia Hagen, her son Oliver, Benny, Celia’s lover Benicio (and, of course, the bad guys, who kidnap Benny from a train in this book).

Jessica Anya Blau (THE SUMMER OF NAKED SWIM PARTIES) called the first book in this trilogy “a sexy, mysterious romp.” It was praised by Indiereader as “a polished page-turner.” The second  book in the trilogy, FORTUNE’s DEADLY DESCENT,  opens with Celia on a train with Benny, traveling through the French Provencal countryside. When Benny disappears, the plot shifts into high gear, with Celia to the rescue.

I caught up with author Reed/Braun to ask her about FORTUNE’S DEADLY DESCENT and  her writing, in general.

Why did you select the pseudonym Audrey Braun?  Why not use your real name?

I come from a literary fiction background, so when I decided to experiment with mystery/thriller writing, I wasn’t entirely sure of myself.  I used a pen name as a kind of cover in case it all went south.  Luckily, that never happened.  Instead, I found a whole new identity and strength I didn’t know I had.  As for the name itself, my birth name is Brown, and, because there is a German connection in my novels, I chose to translate it into the German, Braun.  Audrey was a name my husband threw out as an option, and I thought it sounded great with Braun.  I continue to use the name as a way to separate my literary novels from my mystery/thrillers.  It helps me and the readers know what to expect.

What is your background educationally?  Did you study creative writing in college and, if so, where?

I know you live in Portland, currently, but you have lived in many of the foreign places you describe so well.  What were the circumstances of your living in such exotic places?

I lived in Germany for many years where I was married for a brief time to a German, and where I taught English at a vocational school.  I traveled all over Europe while living there.  After I returned to the United States and remarried, my second husband took a job, coincidentally in Germany, so I returned and wrote fiction while doing some freelance writing projects on the side, and, of course, traveled a lot, too.  My family and I continue to travel often.  We just got back from Germany, France, and Switzerland.  We live in the rainy Pacific Northwest and in winter we are forced to take trips to sunnier climates.  Mexico is a favorite.  In four hours we can be in Puerto Vallarta where the sun is guaranteed.  This is where the idea for my first thriller, A SMALL FORTUNE, originated.

Your own family consists of…?

A husband, two sons—one grown, the other nearly so—and two dogs: a Springer Spaniel and a Border Collie mix.

I noticed a great deal of attention to the sense of smell in your writing.  Writers are always told to employ ALL their senses in writing, but you seem particularly fond of the sense of smell, even to the point of having the young Benny in the novel be very interested in cooking and its smells.  Is this something that just seems “right” to you, or was it emphasized in writing classes you have taken? How did you settle on this technique?

I think the sense of smell is underutilized in fiction.  I like to write with the senses so that my writing has texture, becomes a more visceral and sensual reading experience.  Smell is an evocative trigger of emotion, time, and place.  For example, one whiff of cinnamon, nutmeg, and sugar and we feel ourselves transported into the holidays.  The smell of lemonade or grilled meat transports us to summertime in an instant.  I actually didn’t realize I was writing with such an olfactory focus until reviewers began pointing it out in my work.

I’d like to give you a few lines from the book and ask you whether the theme of betrayal, which is present in both of the books, resonates with you, particularly, and why:  “There are certain places in the world, certain people, including close loved ones that we shouldn’t have to think twice about trusting without fear, without constant revelation.”

Betrayal is brutal, and, therefore, a great tool for fiction.  Deception from someone we love and trust, especially when it comes without warning, is debilitating.  It can knock us so far down that it can take years to build a solid foundation again.  Of course, many people never find the capacity to love and trust after having lost all confidence in themselves and others.  It takes a tremendous leap of faith.  Not everyone can do it.  And therein lies the conflict, the arc of the narrative I’m covering.

Projection.  Bringing focus to the very thing one claims not to be interested in.  Irony. Paradox.  Lies.  All great themes in fiction.”

You seem to have a theme of living in the moment that I noticed; I’d welcome any additional input from you about this theme, as articulated in this quote from FORTUNE’S DEADLY DESCENT: “We knew we were happy at the time of our happiness.  We’ll never need hindsight to tell us what we already know.”

People tend to spend a tremendous amount of time with their heads in the past or in the future.  It seems rare and quite odd that more of us don’t practice living in the moment, understanding our own happiness in real time, while it is happening.  There’s a tendency to look to the past and recognize happiness only after the fact or to imagine such happiness will take place in the future. This is a kind of warped sense of reality. Was it (or will it be) that good?  Or does it just seem so great from a distance?  In any case, I think we fail to honor ourselves and our lives by not being present in them, and this is what Celia is doing here in FORTUNE’S DEADLY DESCENT concerning her love for Benicio.  She doesn’t need to glorify their relationship after the fact.  She did right by him.  No regrets.

“The future was still unknown to me.  Whom would I marry?  Where would we live?  When would I become a mother?” These are lines from A SMALL FORTUNE, but this is a reoccurring theme in FORTUNE’S DEADLY DESCENT that represents  a theme of  an older person commenting on how exciting it is when you are young and your future is still spread out before you.  Is this personal to you in your own life as Deborah Reed?

When we’re younger, there is this sense of discovery around every corner.  The world still has the ability to surprise us.  There are so many things we have yet to do, and we have no idea how it will all turn out.  There is an inherent excitement to this.  Until, one day, we discover that so many of those unknowns have been crossed off our list.  We’ve arrived in our future and are taking a look around to assess the situation.  I think this is where mid-life crises come from.  That whole feeling of, ‘This is it?’  All these years have led me here? Is it enough?  What else should I be doing?  For me, personally, I feel as if I’ve lived many lives, but I also have plenty new and undiscovered things in my future.  I make a point of living this way.  I like change, and I like a challenge.  I also spend a lot of time creating imaginary worlds in my head, which satisfies never-ending curiosities about other lives and possibilities, and that leads me to my favorite quote from the writer Susan Sontag:  “What I really wanted was every kind of life, and the writer’s life seemed the most inclusive.”

In closing, what are you working on now?

I’m finishing up another literary novel that will be published under my real name in 2013.  It’s called THINGS WE SET ON FIRE.  After that, I’ll be working on the final thriller in the FORTUNE trilogy. It takes place in Berlin, and so I plan to spend more time there between now and when it is released, which I hope will be in 2014. 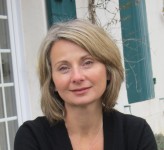 Audrey Braun is the pen name of novelist Deborah Reed. She has lived all over the United States and in Europe, and currently resides in the Pacific Northwest with her family. A SMALL FORTUNE is her debut, bestselling thriller. FORTUNE’S DEADLY DESCENT, her follow-up, is the second of a trilogy.

To learn more about Audrey, please visit her website.

Connie (Corcoran) Wilson
Connie (Corcoran) Wilson, M.S., is a University of Iowa graduate and an active voting member of HWA, AWP, IWPA and MWA, an associate member of ITW, and was named Writer of the Year by MWC (Midwest Writing Center) and Content Producer of the Year (Jan., 2009) by a 600,000 member blog (Associated Content/Yahoo). She has taught writing at 6 colleges and published 2 novels, 5 short story collections, 2 humor collections and 1 children's illustrated book since 2003. Her newest novel The Color of Evil was just named the Gold Medal Winner in the (Jenkins Group) E-Lit competition, while the IWPA (Illinois Women's Press Association) will award her its Silver Feather Award on June 2nd. She will be a presenter at the Spellbinders' Conference in Hawaii over Labor Day (www.SpellbindersConference.com) and her new collection of short stories, Hellfire & Damnation II, is scheduled for release by then by its Rhode Island publisher.