In CRESCENT LAKE, Nick Murphy, a mob informant trying to atone for his crimes – and his role in a tragic accident that killed his wife and daughter – is placed into a witness-relocation program and sent to a small, scenic town believed to be the perfect hideout. But from his first day in Silver Springs, he finds himself in a different kind of life-and-death struggle, one where his past sins have come back to haunt him. He and FBI agent Audrey Harper are quickly caught up in supernatural events and bizarre miracles, and must contend with a town besieged by religious fanaticism – and an enemy that can raise the dead.

And while a ruthless mob assassin closes in on Nick’s location, Reverend Bright plans to expand his dark ministry across the country. Nick and Audrey must overcome their own dredged-up sins, and then rally the few residents that have somehow resisted the Reverend’s influence. They will make a last stand against the whole town; but first, they must confront what rests at the bottom of the nearby lake – the source of the Reverend’s unholy power.

Cool, isn’t it? Now let’s delve into the mind of David Sakmyster, the author of CRESCENT LAKE.

How did the premise for CRESCENT LAKE come about?

I started CRESCENT LAKE with the notion of exploring guilt – not only what we let guilt do to ourselves, how we can let it take over and ruin our lives – but also the power that religion has (if we let it) to potentially use and abuse all this guilt we’re carrying around. Then I thrust that concept onto a character in the witness protection program who’s trying to atone for a great many things. And of course, just as it appears he’s settling into a new life, he finds his perfect hideaway town is actually dominated by a charismatic preacher with the power to bring your worst sins back to life, to haunt you until you literally grant him control over your very soul.

Tell us a bit about the lead characters.

Nick Murphy is the informant who has the goods on a very powerful selection of east coast mobsters, who have sent a ruthless assassin after him.  In addition to his unsavory (and unwilling) association with the mob, Nick is a recovering alcoholic who can’t shake the guilt-plagued nightmares of his pregnant wife – who died in a horrible car accident on the way to the hospital. Nick’s new temporary home is a cabin on the edge of a very peculiar lake.  Audrey Harper is the FBI agent assigned to protect Nick until the trial, and she’s not without her own unshakable guilt over her father’s death. There’s also an eccentric librarian who has managed to escape the reverend’s control, and a little girl who nearly drowned in the lake but came back to life with strange powers – abilities that also let her resist the reverend’s ‘gifts’ (much to his dismay).

What can you tell us about the antagonist, or antagonists?

The Reverend Zachary Bright is literally a man without a past who brought his ministry to the sleepy town of Silver Springs, Washington and then quickly used his dark powers to dominate the townspeople and turn ordinary citizens into intolerant zealots capable of even stoning non-believers. He wears white gloves at all times, except when performing ‘the ceremony’ – laying his bare hands on a person’s head, and then pulling out their darkest sins, giving them life to physically haunt the subject until they yield completely to Bright’s control.  But Silver Springs is only a springboard for Reverend Bright, who has plans on expanding his dark ministry across the country. And when the assassin, the mob boss, and then Nick’s aunt – a senator with ties to the mob – eventually track Nick down and all come to Silver Springs, Rev. Bright suddenly finds himself with three perfect disciples to do his bidding.

I see you also write screenplays. Is it difficult to switch from novel to screenplay or vice versa?

It’s a little difficult to go from one to the other, and I usually have to just focus on one form until done and I’m ready to go back to the other.  But I really like my experience with screenplays, and feel it’s helped to craft more believable dialogue and to develop more concise plotting when going back to novels.

How do you determine an idea should be a novel, screenplay or short story?

That’s an interesting question, and the answer often depends on how much time I feel I can spend on it. I have three great ideas now that I think can work for either novels or screenplays, and probably what I’ll do is both at some point.  I actually haven’t written a short story in a while because of this question – if I feel it’s a strong enough idea for a short story, chances are it’ll work as a screenplay, and then I feel the potential rewards for the effort are greater if I have a screenplay rather than a short story where the options are more limited.  And actually all my early screenplays were adaptations of my published short stories.  Then, there a few more novels – like CRESCENT LAKE – that I feel would make great screenplays. I’ve adapted two of my other novels into screenplays (THE PHAROS OBJECTIVE and BLINDSPOTS) and one of David L. Golemon’s novels – THE SUPERNATURALS. I love that process, as the characters and the plots are pretty much all set already, and the prep work is really more in terms of trimming down the existing outline into fitting a 120-page screenplay. It’s always hard to consolidate secondary characters and non-essential scenes, but it allows for some big time creativity.

In your website, you mention about your father reading scary tales after your mother was out of earshot. Has this “tradition” been carried on to the next generation?

It has. My daughter, Isabella, is 8, and she’s starting to love this stuff. I love reading to her, although Scooby Doo lately has taken the place of the classics, but I’ll get back to them soon enough. I also love taking her to the latest movies like PARANORMAN and she’s really looking forward to HOTEL TRANSYLVANIA. And her mother actually encourages this behavior, so I’m in good shape there!

Are you attending any conference or presentations in the near future?

I’ll be attending World Fantasy Convention in Toronto Nov 1-5, Eeriecon in Buffalo in April, and hopefully the Stoker awards in New Orleans next year!

It’s been a busy summer! I had stories appear in two anthologies: BLOOD LITE III: AFTERTASTE, and WHEN THE VILLAIN COMES HOME, I’ve another one accepted in the forthcoming DARK FUSIONS: WHERE MONSTERS LURK; and then I published two novels, THE CYDONIA OBJECTIVE in July, followed by BLINDSPOTS in August. I’m also writing a ten part series of novellas about NDEs with Steve Savile (THE LAZARUS INITIATIVE), and hoping to start another standalone supernatural thriller next month.

“Reminded me of King’s THE STAND for all the right reasons: salvation, redemption, but best of all, an old school horror story, well told.” – William Meikle, author of THE INVASION, THE VALLEY and ABOMINABLE

“In this chilling, Shirley Jackson-esque descent into a small-town beset by religious fanaticism, Sakmyster has assembled one hell of a cast of characters, each plagued by their all-too-real demons, and seeking redemption from the one man that can in turn enslave their souls. Engaging, thought-provoking and powerful.” –Steven Savile, international best-selling author of SILVER 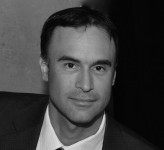 David Sakmyster is an award-winning author and screenwriter who dwells in and occasionally ventures from upstate NY. His published stories and novels cross a range of genres and include: the horrifying CRESCENT LAKE, the historical epic, SILVER AND GOLD, and THE MORPHEUS INITIATIVE – a series about psychic archaeologists (including THE PHAROS OBJECTIVE, THE MONGOL OBJECTIVE and THE CYDONIA OBJECTIVE). He’s co-writing a thrilling series about Near Death Experiences called THE LAZARUS INITIATIVE, and coming this fall is a smart supernatural thriller entitled, BLINDSPOTS. His screenplay, NIGHTWATCHERS, has been optioned, and he’s currently writing another screenplay to begin filming in early 2013.