In an age of Wall Street meltdowns and downgrading of the U.S. credit rating, the secretive Federal Reserve has a pivotal role. What would happen if there was a plot to strike the US Financial System at its very heart?

Mark de Castrique is no stranger to mystery novels. He has two acclaimed series to his credit. Both are set close to where he was born and the realism jumps off the page and wraps you in its warm embrace until you finally, reluctantly, finish the books.

Mark was born in North Carolina, near Asheville where his Sam Blackman series is set, and can often be found walking in the mountains lost in thought as he comes up with new and intriguing plots to throw at his characters.

His new novel is somewhat of a change. The focus is larger, the risks greater and the action fiercer. To accommodate this global threat he has moved the story to Washington. Luckily for those of us not familiar with the city, Mark spent many years there and his local knowledge shines through.

As if the current financial meltdowns across the world were not enough Mark takes us on a rollercoaster ride and lets us know that, no matter how bad things are now, they can actually get worse – a lot worse.

The main character is Russell Mullins, a retired Secret Service agent who now works for a private protection organisation. His current charge is Paul Leguire, the chief liaison between the Federal Reserve and the US Treasury.

When Leguire turns up dead with a suicide note the authorities are happy to believe the obvious cause but Mullins knows Leguire too well and suspects foul play. Mullins can’t let it go and his investigations turn up an ‘out of character’ transaction by Leguire which, not only was wired to an offshore account under Mullins’ name but the manager of the bank suddenly turns up dead.

Suddenly Mullins is the main suspect and he must work outside the system to find the real murderer. Unfortunately for him whoever is in control has far more resources. Mullin’s life gets turned inside out as he struggles, not just to clear his name but to save the very foundation of the US Financial System.

How do you write?

From the standpoint of mechanics, I love working with Scrivener.  The ability to have chapters, research articles/photos, character sketches, within the same program and to be able to compile to various formats is a real plus.  And the program syncs with phone apps PlainText and Simplenote so that my work-in-progress is always available.  Having said that, I also write much of the book with fountain pen and Moleskine or some similar journal.  I’m not yet so desperate as to write on my phone, but I can use the apps to review both my MS and a rough synopsis.  Doing revisions is an ongoing process and I use Scrivener’s compiling options to export my manuscript-in-progress to a format I can read on my NOOK.  I’ve found that reviewing the work in this manner is a closer approximation to the reading experience and I find errors or pacing issues that elude me when looking at a computer screen or reading through loose-leaf manuscript pages.  My editor’s revisions and comments come on hard copy, which I still prefer for both line and content edits.  I guess the short answer to the question is I write any way and anywhere I can.  I’m always thinking about the story.

Do you have a ritual, do you plan out every detail or do you see where the story leads?

When I started, I was much more detailed with my outlining.  I also set very specific writing goals – ten pages a week, one page each day Monday through Friday and five over the weekend.  In forty weeks, I had a book length manuscript.  With my later books, I start with a premise that interests me, connect it to some historical or contemporary real people and/or events and let the story develop.  I maintain a fluid synopsis of where I think the story is headed at any given time, but this may change as new opportunities present themselves.  The synopsis also helps my editor evaluate the strengths and weaknesses of the story at the first quarter mark, which is usually when I share the work-in-progress.  The writing comes faster as the story culminates.  The first half of the book might take six months while the second half takes two.  If I’m constructing the story properly, options are eliminated and characters and actions take over.

Your previous two series are well known for their realism and your ability to capture the essence of North Carolina – how difficult was it to switch to a large city for THE 13TH TARGET?

The switch to Washington, D.C. for THE 13TH TARGET wasn’t difficult because the story demanded that setting.  It wasn’t a case of my wanting to write a story set in Washington, but the necessity of a story about a plot against the Federal Reserve dictating the setting and the scope of the D.C. environment.  I had also worked in television in Washington for four years, coinciding with the Watergate error; so Washington conspiracies were not unfamiliar territory.  Now my wife and I have two daughters living in D.C. so trips to the U.S. capital are more frequent.  Washington is my home away from North Carolina.  I hope the book reads true to the Washington experience.  I was pleased that Publishers Weekly included “convincing color” in its review.

I see you also run a media company – how do you manage to fit in the writing?

My career has been in film and television – broadcast, national/regional commercials, corporate, and documentary work.  Although shoot days can be long, there are also stretches of planning and editing which allow blocks of writing time.  Using both a computer and a handwritten journal enables me to maximize whatever time I can.  I also get up early and try to write something every day.  One self-disciplining trick I use is to stop writing when I know what I’m going to write next – dialogue, description, whatever – because it means I can jumpstart the process when I return to the manuscript.

For someone like me who is building readers, I believe the eBook phenomenon is a help.  A reader might be willing to take a chance on a new author when the cost is less than a movie ticket.  My publisher made the first book in one of my series available for 99 cents for a limited time, and sales of all my books increased.  That’s a measure of success: not that the reader liked that book, but that the reader was anxious to read the next one.  My concern with eBooks is the impact they have on the independent bookstore.  Indies play a crucial role in introducing new writers and being a literary force in their communities.  Most of my signings and presentations are with independent bookstores.  I hope a viable business model develops that enables them to sell eBooks, but I don’t think that has been perfected yet.

One man, former Secret Service agent Rusty Mullins, stands between unknown conspirators and the potential destruction of the U.S. financial system.  But is the danger from within or without?  The more he digs, the more he becomes the prime suspect, caught in the crossfire of international intrigue and desperate maneuvers.  His greatest challenge: knowing whom to trust.  And time is running out. For everyone.  Twelve targets are known.  Only Rusty Mullins holds the key to who or what is the thirteenth?

I don’t have as much time to read as I would like.  Most of my “reading” is done by listening to books.  I like Lee Child, Michael Connelly, and David Rosenfelt to name a few.  My daughter writes children’s chapter books and keeps me up to date on her favorite YA novels.  I think some of the best work is being done in that area.

Two things are in the works.  In November, Bella Rosa Books is releasing a Sci-Fi thriller called DOUBLE CROSS OF TIME.  Set in the year 2030, the story is about a young scientist who meets himself from the future.  His older self has returned to demand he abandon his career and destroy the super collider used for his particle research.  I was interested in a premise based upon two conflicting statements: “He’s his own worst enemy,” and Shakespeare’s “To thine own self be true.”  It’s different than my more traditional mysteries so I want readers to be aware in case the Sci-Fi aspect isn’t their cup of tea.  But I had fun writing it, and I hope thriller and Sci-Fi fans will give it a read.

I’m returning to the North Carolina mountains with a new Sam Blackman novel I’m currently writing.  One of the historical underpinnings is a place in the mountains called The Kingdom of the Happy Land, a commune ruled by a King and Queen after the Civil War.  The commune was founded by a mulatto slave master and his freed slaves, and I find the existence of such a place fascinating.  The Kingdom dissolved in the late 1890s, but I hope to introduce this little known piece of history to my readers in the context of a murder mystery.

After that?  I should probably check in and see how my first series character, Barry Clayton, and his funeral home are doing.  But, the nice thing about writing is you never know what might be next.

THE 13TH TARGET is out in hardback on July 3rd from Poison Pen Press, just in time for Independence Day. The story flows easily and the chapters are short adding to the feeling of impending catastrophe. Those of you who know Mark’s writing will feel like you’re slipping into a favourite pair of slippers as you wile away an afternoon. Those of you looking for a new author among the many names on the shelves can now stop looking. 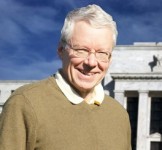 A native of North Carolina, Mark de Castrique is an award-winning film and video producer whose work has been broadcast on PBS, HBO, and network-affiliate stations. He is the author of the Sam Blackman mystery series, the Buryin’ Barry series, and two mysteries for young adults. His books have garnered starred reviews from PUBLISHERS WEEKLY, Booklist, and Library Journal. THE 13TH TARGET is de Castrique’s first standalone thriller. He lives in Charlotte, North Carolina.