RANSOM RIVER is an atmospheric thriller about a complex and flawed heroine, a murder trial, and the long-unsolved mystery it exposes. Rory Mackenzie is a juror on a high-profile murder case in her hometown of Ransom River, California. It’s a place she vowed never to visit again, and her return dredges up troubling memories from the childhood she spent as an outsider. But in the wake of a desperate attack on the courthouse, Rory realizes that exposing these dark skeletons has connected her to an old case that was never solved, and bringing the truth to light just might destroy her.

RANSOM RIVER is your first stand-alone thriller outside of your extremely popular Evan Delaney and Jo Beckett series. What made you want to explore a new character in a new setting?

RANSOM RIVER tells the story of a juror trapped in a hostage situation when gunmen storm the courthouse. Then she discovers the attack is connected to an old case that was never solved. It’s connected to her, and dark skeletons in her family’s history. The story had to be told from the viewpoint of the woman at the center of the storm. That’s Rory.

How does your new heroine, Rory Mackenzie (great last name, by the way), differ from Jo?

Jo Beckett consults for the San Francisco police as a forensic psychiatrist. Rory works for an international charity that helps refugees seeking asylum. Or she did, until the charity lost its funding. So she’s back in the hometown she swore never to visit again. She’s sardonic and guarded and also inherently trustworthy – stray dogs follow her home, knowing she’ll adopt them. She’s been knocked down, but she’s determined to get back up. She’s stronger than she knows.

RANSOM RIVER takes place in a small city and the challenges that people face growing up in a place where it can seem everyone knows what they’re up to. Is this reflective at all of your own background in Santa Barbara?

Yes and no. Santa Barbara doesn’t feel small; it’s always bubbling with action. But RANSOM RIVER is one of those cities that’s over the hill – it’s next door to Los Angeles. It’s overshadowed and overlooked. And that’s how some people like it, because they’re trying to hide secrets and crimes. As for knowing what everybody’s up to, we all have something in our past that reflects that: a town, a school, a family. Someplace where teenage rivalries persist into adulthood. Where the grownups talk in whispers and go quiet when the kids walk into the room.

We share a similar background in that our books were first embraced by UK publishers before being picked up in the U.S. Now that you’ve become a name in America, do you find any difference in the way readers react to your work or in the publishing process?

What was the lightning bolt that made you begin the first tingling brainstorming moments of RANSOM RIVER? Did you ever serve on a jury?

I’m a former lawyer. So I know how people feel about being called for jury duty: trapped. And I know that nowadays criminal courts are extremely concerned about security. They’d better be – in the 1970s, the Marin County courthouse was attacked by a gunman and four people died in a shootout, including a judge. Maybe it was a lawyer’s unconscious fear bubbling to the surface, but I wanted to write about a juror who’s literally trapped in a courtroom, held hostage by gunmen making crazed demands.

This is your 10th novel, an impressive milestone, is there any part of your journey to the bestsellers’ list that you regret or that you would change?

I wouldn’t change a word of what I’ve written. I would stop more often and look around and never forget to enjoy it.

Does living in England present any challenges when you write about California today?

It’s 6,000 miles away, so getting home takes some doing. But I visit California several times a year. Most of my family is there, and they’re happy to keep me up to date on the latest craze or crime wave.

What’s the best piece of advice you would give to someone who wants to write fiction for a living (apart from: become a plumber)?

Write every day. Get in the habit of putting words on paper, even if it’s just a grocery list. Practice and pour your passion into it and write the best freaking grocery list in history.

Give me eggs, pancakes, and coffee from any truck stop diner along an American highway. The black pudding’s all yours, bro. 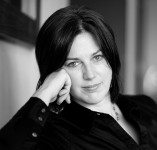 Meg Gardiner is the author of THE NIGHTMARE THIEF, THE LIAR’S LULLABY, THE MEMORY COLLECTOR, THE DIRTY SECRETS CLUB as well as five novels in the Evan Delaney series including CHINA LAKE, which won the Edgar Award for best paperback original. Before becoming a writer, Meg practiced law and taught at the University of California. Originally from Santa Barbara, California, she now lives with her family in London.

To learn more about Meg, please visit her website.