A decade ago, Dr. Declan Stewart, once the world’s foremost authority on ancient manuscripts, vanished from an obscure asylum in Damascus. On a winter’s day shrouded in fog, he rose from his bed, walked out the door and disappeared. No one looked for him because no one cared. The assassins had made sure there would be no one left to care.

For ten years, Declan hides himself away on the isolated western coast of New Zealand’s South Island, riding the towering waves of Ghost Ships break and trying to forget the past. Then on a bright summer’s day, as the sun settles on the western horizon, a dying monk from an obscure Syrian monastery appears on the high cliffs and calls his name. Declan at last realizes that nothing can save him from his destiny; that he will never escape his obsession with the elusive ancient manuscript known only as Q.

The message the old priest brings—of a cryptic letter of St. Paul and a parchment map leading to a lost desert temple—sends Declan hurtling back into a world he had vowed never to reenter. Confronting the demons of his past and the shadowy forces that would turn the power of Q to their own twisted ends, Declan enters a realm of danger, betrayal and death. And there, amidst chaos and peril, he finds not only the destiny he had sought to deny, but the love of a courageous Palestinian refugee and her fatherless son.

The History of Q

Q is the name ascribed to “the one and original” gospel of Jesus that scholars believe must have existed but of which no trace has ever been discovered. Q stands for “quelle,” the German word for “source,” a designation first adopted by the nineteenth-century German theologian Johannes Weiss.

British biblical scholar, Oxford graduate, and member of the Archbishop’s High Commission on Doctrine in the Church of England, B.H. Streeter first formulated the view that Q must exist as a written parchment and not merely an oral tradition. He postulated that it was composed in Greek and that some of its contents could be found in the Gospels of Matthew and Luke. Streeter refused to speculate publicly regarding who could have authored such a gospel, but privately he whispered the question, “Could it have been written in the hand of Jesus himself?”

Some scholars have challenged the existence of Q as either a written document or oral tradition. They question especially the notion that such a highly treasured document as the first and definite gospel would have been lost and as a result, omitted from all of the early Church catalogs. They also question why none of the fathers of the early Christian church would have made mention of it in their own extensive writings.

The true character of Q and the identity of its author remain one of the great, enduring mysteries of modern biblical scholarship.

Is Q: AWAKENING entirely fictional or is it based on historical events?

In 1945, two Bedouins wandering the deserts near Nag Hammadi in southern Egypt (the same deserts G.M. Lawrence wandered in researching this book) stumbled across a cache of ancient documents hidden in a heavy earthen jar. The vessel contained 12 Coptic codices bound in gazelle skin that have come to be known as the Nag Hammadi Library, which offered the first tangible evidence of Q. That evidence came in the form of a complete copy of the Gospel of Didymos Judas Thomas (the Gospel of Thomas). Armed with the complete Coptic translation of the work, New Testament scholars were able to reconstruct the Greek version in its entirety. And it was there, in the Gospel of Thomas, that the first solid clues to the existence of Q emerged.The plot of Q: AWAKENING and its protagonist, Dr. Declan Stewart, are entirely creations of Lawrence’s imagination. However, the places they travel and much of the history upon which the story is constructed are derived from real places and real events.

How did G.M. Lawrence research the story?

In the course of writing this novel, the author went to great pains, during dangerous and tumultuous times in the Arab world, to travel extensively throughout the Middle East to conduct research on location and to interview Bedouins, monks, scholars, and many others. He travelled to post-revolution Egypt, mid-revolution Syria, Jordan, Israel, and the Red Sea coast of Yemen, often relying on Bedouin tribesmen to transport him safely to where he was headed, and in Israel, he worked with a former “black ops” colonel in the Israel Defense Force (the IDF). He wanted the story to be as genuine and real as possible while retaining all of the entertainment and excitement of a fast-paced, international thriller.

Other important locales include Zurich, the home of the characters, Judah Lowe and Emile Zorn, and New Zealand.  With Bruce Hopkins (the actor who portrayed Gamling, General of Rohan in the LORD OF THE RINGS movie trilogy), Lawrence also explored the desolate, storm-tossed beaches on the western edge of the South Island near the fictional town of Graves Bay in New Zealand.  Lawrence surfed the waters of the Tasman Sea that his protagonist, Declan Stewart, surfed. He contemplated the mysteries of God, Q, and humankind, as Declan does in Q as the antipodal summer sun vanished into the endless ocean. Most extraordinary of all, he got to know one of the South Island’s legendary surfers, Barry O’Dae, who aided him in conceptualizing the fictional reef break called Ghost Ships.

What is the most controversial aspect of Q: AWAKENING?

The Q scholars might tell you that it is the authors’ conversion of Q from a simple “Sayings Gospel of Jesus” written by an obscure follower to a manuscript actually written by Jesus and containing a world-changing message.The New Zealanders might say that it is that Declan wears a 3/2 wetsuit. In the real world, a 3/2 is slight protection against the frigid waters of the Tasman Sea.The major publishing houses might say that it is Lawrence’s belief that there is a market for “philo-thrillers” that combine elements of literary fiction and popular action-suspense novels. 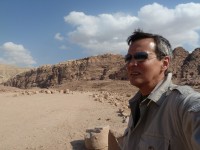 G.M. Lawrence is the founder and chairman of the international investment fund, Pacific Venture Investments, a university lecturer and distinguished scholar. He is a former deep-sea diver, a marine conservationist, and a surfer whose travels take him into the very heart of the exotic and often dangerous locales he writes about. His cultural experiences throughout the Middle East and his association with well-known members of the worldwide surfing community infuse his locales with realism and his characters with an emotional depth that is rare in contemporary thrillers.

In addition to writing fiction, Lawrence is the author of the perennially best-selling business books and is a frequent speaker at domestic and international investment conferences. He and his family divide their time between their homes in Southern California and Texas. Q: AWAKENING is his first novel and the first in the Q trilogy.