LOVE IS MURDER says it all. Story after story. Romantic suspense is the theme of the latest International Thriller Writers anthology.

“The challenge of writing a short story is so daunting to me,” she said.  “I’d rather write a

full-length novel than even attempt a short story because a good one requires a particular talent that, sadly, I don’t have. That’s why I was so impressed by the cleverness of the stories.”

The book’s appeal is also that Brown shares her gut reaction to each narrative’s mechanics and passion, heightening readers’ expectations story-by-story.

“These writers knew what they were doing,” she said. “Each is different. Some are poignant, others scary. Some focus on high octane action, while others are shatteringly emotional or psychologically terrifying.  Reading them for the first time, I was truly, jaw-droppingly amazed by the variety of talent.”

Brown says the allure of romantic suspense as a genre comes because it crosses over so many other genres — mystery, thrillers, even science fiction.  “Diehard readers of those genres find all the elements they expect and favor, plus the love story angle. The romance adds spice, certainly, but it also raises the stakes for the protagonists.  Love is a dramatic and powerful motivator that can instill in a character strong emotions like rage, bravery, despair, all of which makes for great storytelling.” 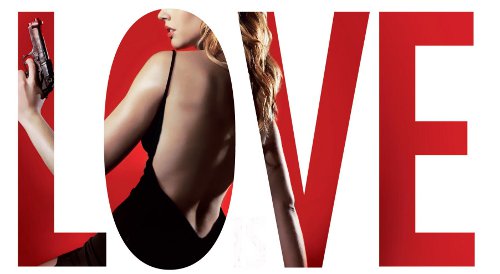 Many of the anthology authors used familiar characters from their novels in their short stories, including Allison Brennan. Her series protagonists Lucy Kincaid and Sean Rogan appear in “Vacation Interrupted” to save a drowning man only to discover he’s not out of danger yet.

“This story gives my fans a snapshot of my characters between books and allows new readers a chance to meet them,” she said.

“No dead bodies, no psychopaths, no one trying to kill us.”

As managing editor of the ITW anthology, Brennan sized up the challenges: “Romantic suspense is more complicated than most thrillers because it requires three central characters  –  a heroine, hero and villain. That’s a lot of conflict to fit in a few thousand words.”

Brennan says most of the sex in LOVE IS MURDER comes from sexual tension. 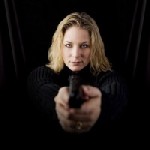 The bad thing about wearing a tight black dress? No place to put my gun.

Yet the story moves from Mercy and her man, Dawson, making up to making out to making love in a sizzling sex scene climax. How did Armstrong fit plot and sex in the three-thousand word story?

“I wasn’t going to force putting sex in,” she said, “but it worked. When I started writing the story, I wasn’t sure there would be time for the characters to have sex because I tend to write long. But in the end, it worked.”

Most of the stories stand by themselves, with no connection to previous work by the authors. But  romantic suspense is no guarantee the characters will live happily ever after. Take Julie Kenner’s “The Honeymoon.”  A bridal couple on a road trip run into trouble…and when their honeymoon is over, so is their marriage.

“I need sleep.” She rubbed her hand along his thigh. “And sex. New brides need lots of sex.”

“I love noir films and novels, “Kenner said, “and I’ve always been particularly fascinated with endings that are both twisted and dark. I wanted to have fun with the journey, but knew from the start that it wouldn’t have a happy ending.”

The time it takes to write a short story can stretch long.  J.T. Ellison wrote a version of “The Number of Man” – a TV anchorwoman stalker tale and shelved it for six years.

It began in a single moment, the briefest of connections.

“When the chance came to write a story for a romantic suspense anthology, I immediately pulled it out,” she said, now having the confidence to write the multiple points of view and up the creep factor in her villain. “What could be more romantic than a stalker, really?”

Ellison says the obsession displayed in her story was inspired by an actual criminal. “The Wooded Rapist here in Nashville. We’d just moved to a house that backed to the woods – and I was warned about him. He only struck on rainy nights, at houses that backed to the woods. Freaked me right out, and variations of his character began to work their way into my stories.”

Of the 29 stories in LOVE IS MURDER, eight were written by men, including Robert Browne whose story “Speechless” deals with a mother-daughter conflict over a boyfriend. Browne wrote the piece from a woman’s perspective in first person so effectively the editor didn’t realize he was male.

The only reason I was there was because of my mother.

So what’s a tough guy like him doing in a romantic suspense anthology?

“Seriously, I’m not much for labels,” Browne said. “To my mind a story is a story and every story I write has some romance in it, so this didn’t seem like much of a stretch to me.”

Browne has written five thrillers, but also found the short story format more difficult. “Fewer words makes it much harder for me. You have to tell a complete story in a few thousand words and that’s a very tough thing to do. Novels give you room to explore. With short stories you have to get in and get out as quickly as possible, and hope you made an impact on the reader while you were there.”

Setting as a Character

In person, Heather Graham exudes a theatrical presence, so no surprise her story, “Grave Danger” takes place in a special effects production studio. Stage props of zombies and werewolves abound, but it’s the hint of real life paranormal that makes readers think about the life and death tale long after it’s over.

The shuffling sound of footsteps had brought her here.

Graham’s inspiration doesn’t always come from her imagination. “I have a friend who works at such a studio and I was still in wonder of all the things I’d seen there,” she said. “She created the little pig that goes “wee, wee, wee,” all the way home in the car the insurance commercials. She also dresses Robert Downey Jr. When he’s being Ironman.  Seeing her work and how so much was created was truly an awesome experience.”

If you can’t get enough of where all her action happens, the studio setting plays an encore appearance in her upcoming thriller, The Unholy.

While most of the LOVE  IS MURDER stories came from popular authors who were recruited to pen a piece for the anthology, three were selected from 68 blind submissions. Among them, Dr. D.P. Lyle – best known for his medical thrillers and acclaimed nonfiction forensics books.  He was stunned when “Even Steven,” the first short story he’s ever written, was declared a winner. His premise centers on revenge: What if a couple decided to kill the murderer of their only child?

“I can still smell him.”

“I wrote it in a weekend,” Lyle said. “I knew the beginning, middle and end in my head. Months and months passed and I didn’t hear anything.” Finally, the wait was over. “An editor at Mira called to say she loved it and that everyone in their office was talking about my story. ‘We want to know what happens next,’ she told me. “Have you considered turning it into a novel?’”

So he did. And Run to Ground will be released by Oceanview Publishing in August.

Lyle hopes the behind-the-scenes story of his success will inspire other writers to try short stories and not be discouraged by authors who claim they are difficult.  “I like to think of myself as a natural born teacher. I hope someone says ‘If that dufus can do it, I can do it.”

The unusual structure of Lee Child’s story, “I Heard a Romantic Story,” stands out from the pack:  a six-page paragraph from the point of view of an assassin. He hooks readers from the first line to the last.

I heard a romantic story. It was while I was waiting to kill a guy.

“I re-read the story when I saw the galleys and I thought, what was I smoking?” Child said. “I treat all short story commitments as a chance to experiment and this is what came out that time. I wrote it in one sitting and didn’t revise it. I think novelists see shorts differently from their readers. I just hope mine cut me some slack.”

As editor, Sandra Brown had no worries about his unconventional approach. “The only problem I have with Lee Child is that he doesn’t write fast enough.  I could read something new from him every day.”

For readers looking for new material from their favorite writers or to find new authors, LOVE IS MURDER delivers plenty of intrigue. The anthology has garnered critical acclaim, including a starred review from Publisher’s Weekly: “Chockablock with nifty plot twists, these stories aren’t to be missed.”

Julie Kramer has moved from journalist to novelist and now writes a bestselling series set in the desperate world of television news. Shunning Sarah will be released by Atria August 7. “Remember Witness – that truly thrilling movie with Harrison Ford in his heyday? Shunning Sarah is an even better suspense story filled with horse-drawn buggies and folks in black hats.” – James Patterson