Jackie Rutledge has faced down everything from darkest sorcery to über-vengeful revenants. Moreover, heading up the Bureau’s special paranormal unit presents unexpected challenges. Handling otherworldly egos and politics have never come easy to this loner agent. And opening up to her sexy vampire lover, Nick, is as unnerving as her unwanted new ability to slip between the realms of the living and the dead…

Now an insidious power holding helpless ghosts in thrall uses any means necessary to discredit Jackie and split her team apart. The only chance she has means baiting the terrifying “Deadworld being” stalking her dreams, hunting her every step—and growing ever hungrier for her ultimate sacrifice.

Duncan added, “THE LINGERING DEAD picks up two weeks after VENGEFUL DEAD, where Jackie is taking over her new role as director of Special Investigations, Nick’s paranormal P.I. firm. Still struggling with unwanted abilities, Jackie digs into old FBI files that may have involved supernatural elements and finds a former agent’s notes on a small town full of ghosts. The town of Thatcher’s Mill turns out to be familiar to Nick, a place where he encountered Drake’s destruction a century earlier. There are not questions Jackie wants to answer, but she will be forced to confront this terror in order to deal with the powerful force that has Thatcher’s Mill in its thrall.”

Regarding this thriller, PUBLISHERS WEEKLY said, “In this fanciful continuation to the Deadworld series, Duncan’s Scooby Gang turns into a cross between Buffy the Vampire Slayer and Criminal Minds.”

FRESHFICTION REVIEWS said, “DEADWORLD becomes one hell of a debut novel in what could be the most promising urban fantasy series to hit the shelves this year.”

An avid reader, Duncan has advice for aspiring writers. “Dedication and persistence are probably the most significant factors to success. You can’t half-ass your way through this endeavor. If you really want it, keep plugging away on a consistent level. Beyond the effort, being able to tell a good story is important. Learn what makes them work. Read a lot. Know the basic rules of grammar, and learn how to edit. There are two writing process aspects, the creative and editorial sides. Having a great story to tell only gets you part of the way there. If you can’t edit with a modicum of efficiency, publishers won’t be interested, and you’ll fail in self-publishing because readers won’t buy stories riddled with editorial flaws. Beyond all that, write—a lot.”

Regarding writing style, Duncan said, “I’m a heavy plotter—perhaps a bit OCD about it—and work out the entire story before I put a word on paper, so I pretty much know how the story goes, though I change details as I go for consistency and believability. For some writers, this method ruins the creative process, but I get excited by what I see in my head and how it all plays out, much like a movie. Putting it to paper brings it to life. There are as many ways to write as there are writers.”

Duncan keeps the art of writing in the family. “I’m married to romance author Tracy Madison (A MATCH MADE BY CUPID). Having another writer in the house is an amazing source of inspiration and help. It keeps me motivated during those inevitable times when the writing drags or frustration mounts. She’s a cheerleader, editor, listener, and someone I can always bounce ideas off of. I don’t think I’d be to this point in my career if I did not have her in my life.”

The ITW member has an interesting outlook on reviews. “Strangely enough, it’s negative reviews I find most helpful. While I certainly love the 5-star ratings and reader comments, like This is fabulous, I look forward to critical observations. I’ve had my share of This was crap comments, but when someone picks apart something they found flawed, it makes me reflect on my story and ask, What could I have done better? For example, one of the things I learned is that I left out far too much of Nick’s backstory and how he became a vampire. This prompted me to write a short story, Blood Justice, which details his backstory. There’s a lot to learn if you can put your pride aside and listen.”

For character development, Duncan said, “I defined Nick with his opening line, ‘One hundred forty-four years was a long time to be a failure at something.’ This set the tone right out of the gate for where he was emotionally. Jackie, on the other hand, was difficult. She’s defined by a childhood incident that traumatized her in serious ways, creating all kinds of emotional flaws. We initially see her as selfish, stubborn, and so trapped in her own problems that it makes it difficult to like her. While I knew where she was coming from, that source of character is not readily available to the reader, so breaking her down and digging into the emotional mess of her personality was important not only for the story but for the readers to gain some sympathy for the character. I pushed the limits here, and must say it was the most challenging aspect of writing this whole series.”

With eBooks versus Tree-Books being a hot topic, Duncan has interesting ideas. “Electronic books are great. It’s made stories more accessible to readers, and anything that gets people reading is good. While I certainly take issue with a lot of this new paradigm, it’s all still developing, and I have high hopes that eventually it will settle into something greater than what we’ve had before. My biggest concern is devaluing the writer, as we’ve seen many poorly edited or structured books that run the danger of making readers believe they’re not worth what they should be. Personally, I find the thought of a good story worth less than a cup of coffee rather insulting, regardless of the economics of the ePublishing world.” 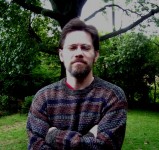 J.N. Duncan is a father of four in Ohio, working away at the day job and living the dream of publishing the fanciful creations in his head. He loves all things paranormal, is a bit of a gamer geek, and thinks anything related to astronomy is beyond cool. THE LINGERING DEAD is his fourth novel, and he’s working on a new Urban Fantasy-Crime Fiction story.