Never before had Holmes and Watson come up against a brotherhood like the Kipling League. Dedicated to their Patron Rudyard Kipling, the Poet of Empire, the League’s sole allegiance was to England’s civilising mission. Its members would allow nothing to get in their way.

Tim Symonds’ new novel SHERLOCK HOLMES AND THE DEAD BOER AT SCOTNEY CASTLE  will be published March 19 by MX Publishing, known for their Sherlock Holmes’ authors.

Holmes and Watson take the train to address the mysterious Kipling League at Crick’s End, a Jacobean mansion in deepest Sussex. A body is found in a wagon pond at nearby Scotney Castle – but why the wagon pond and not the moat? And why unclad? What is the meaning of the pair of shiny dark glasses clutched in one hand? And that hatband – could it really be from the skin of a yellow and brown spiny snake?

I first read the Sherlock Holmes ‘canon’ when I was at a private school (‘Boarding school’) in the tiny island of Guernsey, in the English Channel, about 20 miles from the coast of France.  Reading at night after lights-out was forbidden but like all small boys we had flashlights tucked away in the dormitory.   It was decades later – two years ago – after a life- time travelling the world – farming in Kenya, graduating from UCLA (Poli Sci) for example – I settled down in a hidden valley in East Sussex, England, and began to write SHERLOCK HOLMES AND THE DEAD BOER AT SCOTNEY CASTLE. 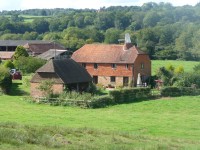 Every day in each of the recent summers I set off from home (see photo attached of Park Farm Oast) with a folding canvas chair, a laptop and a notebook.  I settled in woodland glades with the chair and a flask of coffee and spent hours far away in my mind, describing how Holmes and a reluctant Watson tried to take on the little-known but quite sinister Kipling League.  I located the plot right here in Burwash, East Sussex, because Rudyard Kipling’s old home is just down the farm track, in real life called Bateman’s (in the book I call it ‘Crick’s End’), and the ruins of Scotney Castle are about 15 miles away just over the county line in Kent.  Both are owned by the National Trust and welcome visitors.  The principal character who is president of the Kipling League is quite strongly based on Kipling himself.  I don’t think it spoils the plot to say Holmes gets utterly defeated by ‘the four best brains of the British Empire’ though we may wait to see if it happens twice.

I am now beginning to put a plot together for a further Sherlock Holmes, this time located in Bulgaria in 1900.  It looks like turning out to be the weirdest plot I have ever come up with.  Central to the plot are the machinations of a real Prince Regnant of Bulgaria, called ‘Foxy Ferdinand’ – but that really is another story!   First I hope you will enjoy SHERLOCK HOLMES AND THE DEAD BOER AT SCOTNEY CASTLE. 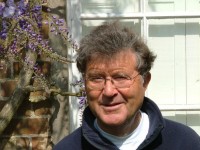 Tim Symonds was born in London and brought up in Guernsey, the Channel Islands. As a teenager he farmed in Kenya before taking a degree in Political Science at UCLA. He has been a political journalist for more than 35 years. He now lives in East Sussex, England, down a track from Rudyard Kipling’s old home, Bateman’s.