Dr. Sophie Knowles is a professor with a way of making even the most complex math problems fun for her students. But when the school’s beloved librarian is found shot to death in the stacks, Sophie learns that her friend was more complex than she ever knew. Now, Sophie must take on some rigorous deduction homework before the chances for another murder on campus increase exponentially…

Ada Madison launched her academic thriller series with the SQUARE ROOT OF MURDER and follows it up this month with the second in the Professor Sophie Knowles series, THE PROBABILITY OF MURDER.

In THE PROBABILITY OF MURDER, Sophie finds herself in the middle of an investigation after her friend, Henley College librarian Charlotte Crocker, is found dead in the library. When Sophie learns Charlotte wasn’t the quiet, law-abiding citizen she seemed, she sets out to determine who her friend really was, and to find her killer.

“… peppered with interesting characters, lively dialogue, and a good dose of brainteasers.” ~EQMM 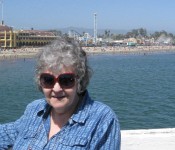 The author received her Ph.D. in physics from Fordham University, NYC. She is currently on the faculty of Golden Gate University, San Francisco, and on the staff of Livermore National Laboratory. She is also on the board of the NoCal Sisters in Crime.

THE PROBILITY OF MURDER is a paperback original from Berkley Prime Crime and will be released this month.

As a bonus, books in this series include brainteasers, puzzles, and their solutions, suitable for puzzle lover of all levels.

To learn more about Ada, please visit her website.