If it’s Werewolves, this must be Germany

What is it about Germany that links it with werewolves, in my mind?

Partly, it’s the European countryside, beside which my native England seems cosy and tame in comparison. All those craggy mountains, their peaks as sharp as wolves’ teeth, and dark pine forests, the haunt of evil in many a fairytale. And I loved fairytales, when I was a child. To some people, I’ll grant, the Black Forest conjures up images of decadent desserts. But I’ve never been keen on chocolate cake—give me a home-made apfelstrudel any day—so my mind fills with shadows of the supernatural, lurking within those atmospheric woods and scheming to pounce on unwary travellers.

Then, of course, we have the infamous Peter Stubbe, the werewolf of Bedburg. For those who don’t know the story, he was “a most wicked Sorcerer, who in the likeness of a Wolf committed many murders, continuing this devilish practice 25 Years, killing and devouring Men, Women, and Children,” according to a London pamphlet of 1590. At least, those are the crimes he is supposed to have confessed to, after being “put to the rack.” (I’m not sure I wouldn’t have confessed to anything I was accused of, in a similar situation.) It was said that the devil gave Stubbe a belt, and when he put it on, “he was straight transformed into the likeness of a greedy, devouring wolf, strong and mighty, with eyes great and large, which in the night sparkled like unto brands of fire, a mouth great and wide, with most sharp and cruel teeth, a huge body and mighty paws.”

Whatever the truth of the situation (was Stubbe simply an “ordinary” serial killer, or even framed for political reasons?), the legend of the vicious German werewolf lives on, more than four centuries after he was put to death on Halloween night, in typically (for the times) gruesome fashion. Is it because of the lurid language of the pamphlet? The terrible nature of the crimes? Or is it because even in this modern day and age, we’re complicit in our fear of the dark, and the supernatural monsters it might hide?

And then there’s *Unternehmen Werwolf*. Of course, there were no actual werewolves in Hitler’s organization, which was intended as a Nazi resistance force to fight Allied invasion in 1945. Indeed, the whole undertaking developed a mythos that far exceeded its actual operations. Familiar with Nordic folk tales of berserker warriors, such as the shape-changing Skallagrimsson, the German people, like other Northern Europeans, were predisposed to associate werewolves with fierce fighters.

But what if there had been real werewolves available? It’s easy to imagine the Nazi regime seeking ways to utilize this unique resource, and the Communist government of East Germany carrying on that work. It makes an author wonder…. 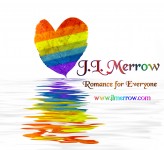 She writes across genres, with a preference for contemporary gay romance and the paranormal, and is frequently accused of humour.

To learn more about JL Merrow, please visit her website.