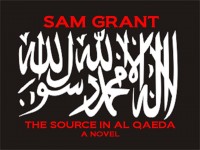 Given the nature of Al Qaeda, a group of dedicated jihadis, penetration by the CIA of its inner circle was considered next to impossible until…the letter addressed to Matt Edwards, Vice Consul of the U.S. Consulate, Peshawar, Pakistan in March of 2000 changed this status quo. This source, however, refused to play by Langley’s rules and insisted on terms which included anonymity.

The agent controlled the “control officer,” Edwards’s worst nightmare but the latest information had been invaluable: The U.S. Embassy in Islamabad was saved from destruction by a hijacked Pakistan Army Hip helicopter, piloted by a man who sought martyrdom in the name of Islam on the U.S. Election Day.

Al Qaeda’s Hadhrami “Sheikh,” Abu Hamza and Abdul Zahiri, his pudgy Egyptian sidekick, both realized there was a traitor in their midst who must be silenced before it’s too late. The Manhattan Raid in 2001 must not be jeopardized.
As the action reveals, betrayal is everywhere; trust has to be earned and even then is never permanent.

THE SOURCE IN AL QAEDA is available from Amazon.

If you deem it worthy of a review (big hat tip), please access link.

About the author: “Sam Grant” is a pen name of a “recovering academic” with a PhD who has published articles on Al Qaeda and other terrorist movements in scholarly journals such as Terrorism and Political Violence. Grant has lived and traveled extensively in places like Afghanistan and Pakistan. He is fluent or very rusty in six languages and have taught courses on the Middle East, as well as worked as a contractor with the U.S. Government and its military on “culture” and terrorism.

“Sam Grant” can be contacted at samgrantwriter@yahoo.com. For more the author’s postings on The Source in Al Qaeda please visit his blog.