Gene Redhouse believes in signs. But when Lori Baker literally jumps into his life, the Navajo wisdom he’s learned disappears. Lori is being stalked and she’s never been so frightened, or so alone. Although it seems they belong to different worlds, the connection between them is instant and intense. And if he can keep her alive long enough, he vows to explore every inch of her.

With his chiseled features and powerful build, Gene is the safe harbor in Lori’s stormy sea. And yet with her past weighing her down, Lori must decide which is more dangerous: the stranger trailing her every step, or the one daring her to trust him.

“Thurlo’s fast paced plot is loaded with page-turning action and romance, all against a sumptiously appealing background of Navajo traditions and legends.” ~Romantic Times 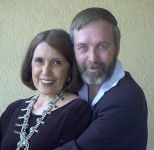 Aimee’s husband and co-author, David Thurlo, was raised on the Navajo Indian Nation where most of their stories are set. They are a team, professionally and personally, and have been married for forty-two years. Aimee and David also write the Ella Clah mysteries for Forge, and their Lee Nez vampire stories have been optioned by Red Nation Films.

To learn more about Aimee and David, please visit their website.