NEW YORK JOURNAL OF BOOKS praised debut paranormal author Chris Holm’s DEAD HARVEST (Feb 2012) for its ability to pull ‘readers in and pins us to the edge of our seats with a cleverly conceived story that is flawlessly executed.”

Although this is his first novel, Holms previous work has appeared in: ELLERY QUEEN’S MYSTERY MAGAZINE, ALFRED HITCHCOCK’S MYSTERY MAGAZINE, and THE BEST AMERICAN MYSTERY STORIES 2011. He’s also been an Anthony Award nominee, a Derringer Award finalist, and a Spinetingler Award winner.

DEAD HARVEST is the story of Sam Thornton, a young man who collects souls. The souls of the damned, to be precise. Once taken himself, he’s now doomed to ferry souls to hell for all eternity, in service of a debt he can never repay. But when he’s dispatched to retrieve the soul of a girl he believes is innocent of the horrific crime for which she’s been damned, Sam does something no Collector has ever done before: he refuses

This month The Big Thrill chats with Chris about his DEAD HARVEST, STAR WARS  and Big Fish Storytelling with his grandfather.

Since you’re a fan of STAR WARS, what influence has the series made on your writing? On DEAD HARVEST?

I’ve been a fan of STAR WARS so long, it’s no doubt had a hand in wiring every storytelling circuit in my brain. Let’s see if I can keep this answer under a couple thousand words.

One obvious answer is that STAR WARS was borne of Lucas’ love of classic pulp fiction, and the movie serials they inspired. That love must be contagious, because I caught it something fierce. DEAD HARVEST is very much a tale in the classic pulp tradition, incorporating elements of Golden Era crime fiction, WEIRD TALES horror and fantasy, and dime-store adventure novels into what I hope is one hell of a thrilling ride.

On the other hand, STAR WARS leaned heavily on Joseph Campbell’s so-called hero’s journey, and that was something I consciously set out to avoid. Prophecies, chosen ones, and destiny are all well and good, but I wanted my protagonist — and, in fact, all my characters — to live and die by their wits, without benefit of magic scrolls, mystical visions, or kindly old mentors who can move things with their minds. When the future’s uncertain, it keeps the action on a razor’s edge.

Oh, I’ve been writing novels for longer than I’ve been writing stories. The first shorts I wrote were, in fact, a crass attempt to pad my query letter, dashed off when I neared the end of my first novel. But despite myself, and my deluded fantasies of being a Serious Novelist, I fell in love with the form, and it’s a good thing. That first novel never saw the light of day, but those first shorts — and the ones that followed — have served to make me a better writer.

If DEAD HARVEST was a punk rock song what would be the chorus?

Believe me, if I could write a decent punk chorus, I wouldn’t be bothering with this whole author thing. So rather than embarrassing myself by trying, I think I’ll tear a page from the Misfits back-catalog, and go with “All hell breaks loose.”

Why is DEAD HARVEST The Big Thrill for February 2012?

DEAD HARVEST is a warm slug of cheap whiskey in a dive bar you entered on a bet and might not walk out of alive. It’s equal parts detective novel, wrong-man conspiracy, and rollicking action-adventure. It’s got pissed-off angels, waking-nightmare demons, and half of New York’s finest, all hunting down one frightened little girl. All that stands between her and them is the guy hell sent to collect her. He thinks she’s been set up. If he’s right, then whoever targeted her for collection is trying to upset the fragile truce between heaven and hell, and jump-start the Apocalypse. And if he’s wrong, then he’s on the run with a pint-sized psycho killer. So, you know, no pressure.

Who were your literary influences that are not famous/published and why? (could be English teacher, neighborhood slam poet, an old girlfriend who wrote love letters)

Without a doubt, my biggest unpublished influence would be my Papa Burns. Papa (he hated to be called Grandpa, and he wasn’t the sort of man a child was prone to cross) was a cop, a voracious reader of crime fiction, and a consummate storyteller. It was from him I got my love of mysteries, and from him I learned how captivating a good story could be. Every Sunday dinner, it seemed, he regaled the family with stories from his time on the beat — Big Fish tales of dubious factual accuracy one and all. The grandkids would listen rapt; the adults would egg him on, or add in a bit of detail he left out, for of course they’d heard his stories a hundred times. They were funny, thrilling, ridiculous, outlandish — and every time he reached the end of one, he’d say, “My hand to God.” If I wind up half the storyteller my Papa was, I’ll be doing fine.

Who are your literary influences and which of their stories influenced your writing style, particularly your writing of DEAD HARVEST?

Questions about influences can be tricky. I think half the time, when a writer (this writer included) talks influences, it’s more wish-list than truth. That said, DEAD HARVEST wears its influences on its sleeve. The title is a riff on Dashiell Hammett’s pulp masterpiece RED HARVEST, in which a nameless detective single-handedly cleans up a crooked town. My main character, Sam Thornton, takes his name from Dashiell’s first (Samuel) and Raymond Chandler’s middle (Thornton.) The second book in the series, THE WRONG GOODBYE, is named after Chandler’s THE LONG GOODBYE. So you can see I’ve made no bones about the works that inspired me to tell Sam’s tale.

But DEAD HARVEST isn’t simply a detective-novel pastiche. It’s a supernatural thriller about a man long ago condemned to hell, and the living girl he’s trying desperately to save from the same fate. It’s first in a series that filters the battle between heaven and hell through the lens of classic crime pulp. It’s got angels in Crown Vics, demons running speakeasies, and an undead protagonist stuck doing the devil’s bidding for all eternity… or at least, so he thinks. And for the fantastical elements, I’d like to think folks like Neil Gaiman, Tim Powers, and H. P. Lovecraft had a hand in shaping my style, though a youth misspent reading Stephen King when I should have been doing homework no doubt had some sway as well.

Describe to me in 14 words or less DEAD HARVEST.

A damned man defies hell to protect a condemned girl he believes was framed. (Whew! That was a squeaker.)

DEAD HARVEST has been reviewed as not just a thriller hybrid, but the best of multiple thriller genres (crime/paranormal/horror), while others describe it as a changing tide in suspense storytelling. I’m curious. When you wrote the story what did you want to do differently than what you’ve read before in novels?

I’m not going to pretend like I’m the first guy to ever mash together crime and fantasy; folks like Jim Butcher and Charlaine Harris have been doing it for years with great commercial and critical success. But if I had to carve out a piece of real estate and claim it as my own, I’d say I was particularly interested in writing fantasy that truly reads like old-fashioned crime pulp: so lean and propulsive the pages damn near turn themselves. Don’t get me wrong, I’m a huge fan of sprawling fantasy, be it Tolkien or Susanna Clarke, but pulps, and the modern thrillers they inspired, are where my heart lies.

What elements should novels now have?

I don’t pretend to be remotely qualified to answer this one. I could outline necessary and sufficient conditions until I’m blue in the face, and it’ll take roughly thirty seconds for a commenter to point out an utterly fabulous novel that contains exactly none of them. What I will say is this: the “now” in the question is unnecessary. The requirements haven’t changed dramatically since the advent of the novel. And from my perspective, voice trumps all. If an author’s voice hits me just right, they can tell me any story they like, and I won’t mind.

Why is Sam Thornton’s story important for you to tell?

Sam, and Sam’s journey, are in many ways a culmination of all my literary, pop-cultural, and philosophical obsessions. I’ve already touched upon my love of pulp novels, conspiracy tales, and modern fantasy, but Sam’s story to me is also deeply romantic, and touches on some pretty heavy concepts as well. Without giving too much away, Sam was a good man in life who bargained away his soul to save someone he loved, and that sacrifice defines him, both in my mind, and in his own. As a lapsed Catholic once removed (my extended family practices; my immediate does not), I’ve always had an outsider’s fascination with the faith around which I was raised; it’s a faith of strict rules and arcane rituals, and of dire consequences for those who flout them by accident or by design. As a child, I remember being terrified of the notion that a good person could still wind up in hell: for not believing, for failing to be baptized, for loving the wrong someone in the eyes of their church — for any number of reasons, really. To some extent, this series affords me a way to explore that notion. To tease apart the separate but intertwined concepts of faith and religion. To write about love and lust and loss and sin in a way I’d find engaging as a reader. Whether I’ve been successful in any of that is for the audience to decide.

What have I not asked you that you would like included in The Big Thrill?

I’d like it to be formally documented that I’m quite handsome in person, regardless of any photos you’ve seen to the contrary. That I have a lovely singing voice, particularly when no one’s in earshot. That if any of you fall so head-over-heels in love with my writing that you elect to stalk me, I’m really very fond of pie (any variety, and preferably not poisoned.) And that the second novel in Sam’s series, THE WRONG GOODBYE, will be out in November 2012, should you enjoy DEAD HARVEST. Which I really hope y’all do. 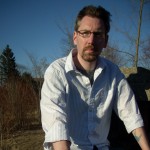 Chris F. Holm was born in Syracuse, New York, the grandson of a cop who passed along his passion for crime fiction. He wrote his first story at the age of six. It got him sent to the principal’s office. Since then, his work has fared better, appearing in such publications as Ellery Queen’s Mystery Magazine, Alfred Hitchcock’s Mystery Magazine, and THE BEST AMERICAN MYSTERY STORIES 2011. He’s been an Anthony Award nominee, a Derringer Award finalist, and a Spinetingler Award winner. DEAD HARVEST is his first novel.

To learn more about Chris and DEAD HARVEST, please visit his website.

Miranda Parker
Miranda Parker is the author of A Good Excuse to Be Bad, Book 1 in the Angel Crawford Bounty Hunter Series. This former entertainment reporter has written over fifty features articles for various magazines and spent many years as a publicist for national recording artists, actors, ministers, and authors. However, writing fun, fiesty, redemptive bad girl gone good stories is her passion. Now Parker writes southern romcom suspense for Kensington Publishing Corp. She resides with her family in Georgia near a horse ranch and her daughter's Girl Scout Troop.