A VINE IN THE BLOOD, Leighton Gage’s fifth thriller due in December, is driven by the upcoming FIFA World Cup games to be held in Brazil and solving a kidnapping that will dramatically effect Brazil’s futebol team, an assumed favorite to win the games.

Gage’s four previous Chief Inspector Mario Silva Investigation thrillers have included travels through Brazil’s interior, mixed in with politics and corruption in the bigger cities like Sao Paulo, that trickle down to the police and government agencies in out-of-the-way locales.  A VINE IN THE BLOOD focuses on Sao Paulo and its suburbs, allowing Gage to show readers one of Brazil’s largest cities with its traffic and roadway problems as well as its everyday citizens.

While North Americans are slow in showing enthusiasms for the sport of soccer (futebol in Portuguese) most of the world is held captive during the FIFA World Cup (think of Super Bowl fever and multiply it by one hundred) and when mother of Brazil’s top player – Tico “The Artist” – is kidnapped from her home and two young servants are murdered, Brazil’s top officials get involved. It doesn’t help the investigation that the mother was abusive to the domestic help and neighbors, giving the police many suspects to eliminate.

The Sao Paulo federal officials want the case solved quickly. Gage shows a variety of suspects, aside from the Argentinians, and he and his crew quickly uncover criminal plots, but not the kidnapping.  The investigation includes looking at two Brazilian mobsters as they prepare for Carnival. There is no shortage of suspects, including Tico’s opportunistic girlfriend, but there is a shortage of time allowed by the Sao Paulo officials and the police team spreads itself thin. Gage gives readers an insider’s view of some of Brazil’s unusual events and procedures.

Throughout, Federal Police Inspector Silvia does his job as he placates his bosses at the federal level and chases down leads.

Gage’s characters are well thought-out, and after four published thrillers they excel in personality and mannerisms that are believable and sometimes, during the darkest moments, bring lightness to the story.

It is obvious Gage, an American who lives part time in Brazil with his Brazilian wife Eide, loves the country and people, and has hope for the justice system. He’s also picked up an understanding and fondness for futebol.

Among others, both the New York Times Book Review and Publisher’s Weekly have praised Leighton’s series.

Publisher’s Weekly said, “Rising above Brazilian brutality, corruption, and bribery with uncommon wit and the help of his colorful, appealing colleagues, he scores a winning goal in an enormously complex kidnap payoff scheme.”

The New York Times Book Review said, “That’s the odd thing about this detective: the elasticity of his ethics, not his essential integrity, is what makes him irresistible.”

A VINE IN THE BLOOD is from Soho Crime and becomes available this month. 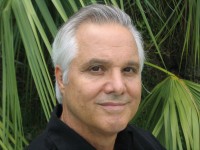 Leighton Gage’s books are crime novels set in Brazil. The author has lived in Australia, Europe, and South America and traveled widely in Asia and Africa. He visited Spain in the time of Franco, Portugal in the time of Salazar, South Africa in the time of apartheid, Chile in the time of Pinochet, Argentina in the time of the junta, Prague, East Germany, and Yugoslavia under the Communist yoke.

To learn more about Leighton, please visit his website.

November 28 - December 4: What was the big lesson that awaited you after you completed your first novel?