Dotan Naor—a former Mosad agent and now a private eye—tries to find Sigal Bardon, an Israeli beauty who disappeared in Bangkok. What he discovers there is much trouble and confusion, and he is drawn into a dark period from his past. This contemporary thriller deals with the Israeli micro-cosmos of backpackers, corrupt foreign affairs, Israeli Buddhist monks, and the secretive Israeli-Russian mafia. It is a whirlpool of passion, violence, and a surprising spirituality.

The only Israeli journalist in Iraq in 2003, Yigal Zur added, “There are a few levels in the novel. Primarily, there is an investigation: Private eye Dotan Naor is assigned to find Sigal Bardon, an Israeli missing in Bangkok. Like many young Israelis she got involved with a drug deal gone bad. On another level, Dotan finds out that he is being manipulated. The third tier is the essence of the book—the betrayal. Dotan was kicked out from General Security Service (the GSS) after an embarrassing failure in the Palestinian city of Jenin. He comes to Bangkok and learns the only way to find Sigal is to dig into his past, the places he avoided.”

A commentator for Israel’s main television station said of protagonist, Dotan Naor: “He has something from Philip Marlowe, maybe the tendency for self-destruction, maybe the coarse language, maybe the whiskey and cigarettes, but the end it is not typical Chandler. And this I will let you to find for yourselves.”

Zur said one scene makes the novel compelling. “A taxi driver gives Dotan two Israeli passports, one of them Sigal’s. He is shocked. For Israelis abroad, passports are sacred. You do not lose them! This is based on a true story. A taxi driver gave me a genuine passport. The passenger was on drugs and did not pay the fare. He gave his passport as a deposit.”

Inspiration for the plot is reality based. “I wanted to write about guys who get kicked out of the GSS [Israel’s version of the Secret Service] after many years, after they gave all of themselves to the country. They have to start over again. But they take with them what I would call their ‘bag’. They know how to function. Too well. But their self awareness is shallow, limited. Dotan’s ‘journey’ to Bangkok is not only to find Sigal but to discover his new self.”

Being a journalist and travel guide writer, Zur knows his foreign settings. “Luckily I know very well the places where the plots take place. But still I do a lot of research. I read mainly documentary stuff, such as nonfiction books and articles. For example I met personally Kun Sa, the drug warlord in the Golden Triangle. I saw poppy fields but I never saw a brick of heroin, so I had to find out what the weight, size, and so on. I see the plot as a mélange of different stories and episodes I’ve seen or read, about which I let my imagination roam freely. My next book, which will appear mid 2012, has to do with an Israeli arms trafficker. It all started when I found the best Israeli gun, the Tavor, in Darpur.”

Zur said, “In Israel writing thrillers and suspense is sort of new thing. It was looked down on as an inferior genre. I switched myself, maybe the novel did it. Now there are more thriller writers, and readers enjoy this genre.”

Zur has advice for aspiring writers: “Roll out of bed to the desk. Do not answer the mobile, do not check your emails. At least not until after noon. Do some jogging or yoga when you are stuck, and be true to your story.”

Regarding the mechanics of writing, Zur said, “Every book is different. With Troubles in Paradise, I did a lot of filling in the gaps, mainly because I did not originally plan a thriller. Later on I thought that this form is the best to tell the story. With the one I recently finished, I wrote straight through. I knew the characters, the plot in general, and I wrote it as if I knew it in advance. It was like writing a short story but four hundred pages.”

Comments from readers are always appreciated. With Zur, a picture was worth a thousand words. “A reader took a photo in Bangkok and sent it to me. My book was in the hands of a tuk-tuk [sort of a three-wheel motorized rickshaw] driver. No words needed.”

Ed note: At this time, TROUBLES IN PARADISE is only available in Hebrew. 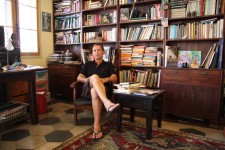 Yigal Zur is a writer and journalist who has written many travel books and guides to India and China, a script for which was filmed in 1999. Amongst his ten published works are Dark Prune, Spring of Almond’s Blossom, and The Monsoon’s End, but Troubles in Paradise is his first thriller. The second Dotan Naor private eye series will be released in summer 2012, tentatively titled Death in Shangri-la. Zur writes travel articles when he is not traveling.

Dead of Night by Jonathan Maberry

The Spy Who Left Me by Gina Robinson