You wouldn’t think taking a vacation would be a dangerous endeavor, but for Douglas Abledan it is. Getting mixed up in a murder is the last thing this blind computer technologist expects when he travels to Chicago. But, as an ancient corn plague is reborn in Mexico, and a group of scientists meet to discuss a cure…one of them is about to die.

The year is 2021. Natural forces have changed our world. As the Earth’s magnetic poles have shifted, pressure on the planet’s mantle layer is building. The bottom line…earthquakes now wreak havoc in areas they have never occurred before.

In Mexico, members of an archaeological team investigate the remains of an ancient village uncovered by a quake; racing to prove their theories about the civilization that once lived there. But, disaster strikes when the accidental destruction of an artifact unleashes a worldwide agricultural plague.

Halfway across the continent, Douglas Abledan, a blind computer technologist, embarks on a long-anticipated vacation. On the plane to Chicago, he meets world-renowned agricultural pathologist Cara Cordelia, but their chance meeting could cost them both their lives.

In this stand-alone sequel to his critically acclaimed “Blind Traveler Down a Dark River,” author Robert P. Bennett continues to bring us suspense and intrigue while exploring a world of the not too distant future. While society struggles with the impact of natural changes, the advancement of new technology enables a blind man to investigate a murder. 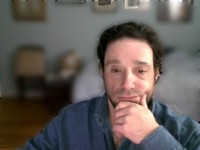 Robert Bennett, a former social worker turned writer, lives in the house he grew up in with his mother, one of his two brothers, two dogs that don’t get along, and a turtle. His lifelong focus has been a concern for the needs of society’s disenfranchised. His articles span a wide range of topics from sports to technology and from politics to social justice. His fiction is grounded in real world events and technologies as well as his own philosophical concerns. “It is the act of truly living and believing in yourself that is important, not the manner in which that action is undertaken.” Mr. Bennett has spoken to groups of physical therapy students, church members and senior citizens, and has appeared on several radio programs.