It is the story of a world where dominion ghosts epitomize the height of terran evolution and physical conditioning. Augmented by technologies that harness their innate psionic potential, these lethal operatives use telepathy and other superhuman powers to isolate and destroy the enemies of the Dominion. But when the hunters become the hunted and ghosts start disappearing without a trace, even the most dangerous human soldiers in the Koprulu sector have something to fear…

Enter Nova Terra, a ghost of unparalleled ability. On orders from Emperor Arcturus Mengsk, Nova embarks on a secret mission to find her missing comrades. As her investigation leads down a maze of dark corridors, painful memories of her pre-ghost years begin to surface. Soon, Nova learns that there might be a connection between the missing agents and her past, a discovery that will pit her against both the shadows of her youth and a terrifying new breed of psionic warrior: spectres.

Booklist stated that “with each new novel, Kenyon further establishes himself as one of horror’s most original storytellers…his mixture of gruesome imagery and technological speculation will appeal to sf and horror enthusiasts alike.”

The Big Thrill chats with Nate Kenyon about StarCraft Ghost: Spectres and writing a scene that scared him into turning on his lights.

How did you get chosen to create a novelized version of StarCraft Ghost: Spectres?

An editor at Pocket Books read my sci fi novella PRIME and loved it, and asked my agent if I’d be interested in writing for them. I’m not a hardcore gamer, but I knew the franchise, and Blizzard’s reputation in the gaming world is second to none. I jumped at the chance. Now I’m finishing up a Diablo novel for them, and I hope to write more.

There was already an origins novel in the series written by Keith DeCandido, who has done a lot  of fantastic tie-in work for Blizzard and many other companies. Pocket needed someone to continue the overall story arc of Nova, the elite ghost operative known and loved by many StarCraft fans. So I had a base to work with, and Blizzard had a concept for what they wanted from me. The spectres are a fascinating offshoot of the ghost operatives in the game world, but their origins were shrouded in mystery. We wanted to tell that story–and put Nova in the middle of it. And we wanted to make it dark, creepy, and yet true to the game.

From there, I did a lot of research–reading past SC novels, studying Wiki sites, talking to Blizzard’s creative team–just absorbing everything I could about the SC universe until I felt comfortable enough to jump in. It took quite a bit of time. I had a fantastic brainstorming meeting with Blizzard where we hashed out a firm outline. Once I started writing, I worked with some existing SC characters and settings, and created some of my own too, with Blizzard’s blessing. By the time I hit the second or third chapter, I really felt like I was in my own world, working with concepts that were very familiar to me.

What did you learn about yourself as a writer when you took on this project?

I can work in someone else’s playground, and enjoy it. I can complete a project pretty far outside my normal comfort zone, and be happy with the result.

Who is Nova? Why should we care about her instead of playing the game?

Nova is part of an elite group of stealth government assassins called ghosts, all of them with unique psionic gifts. Nova is one of the most powerful ghosts ever to exist, and she can do everything from read others’ thoughts to perform incredible feats of telekinesis. She’s beautiful and deadly, but she’s deeply scarred, having lost her entire family when she was young, and she has trouble connecting with others. The ghost program, with its mandatory mind wipes, is a perfect fit for her because she can hide from her own past, her own guilt and memories. Until, of course, the past creeps back in.

I think reading a novel like this is a very different experience from playing the game. Spectres can be read by hardcore gamers and fans and I think they’ll love the backstory they’ll get from it–you can flesh out a story so much more fully in a novel. But I very intentionally wrote this so that non-gamers could enjoy it as well. I think it holds up as a wild, crazy thrill ride first, and a media tie-in second.

Do you have a favorite female heroine? Who?

Probably Clarice Starling from Silence of the Lambs. One of my favorite novels of all time, and one of my favorite characters. She’s so strong, so clever, and yet so vulnerable in a way even she doesn’t fully understand. Wonderful creation by Harris.

What tools did you use to write with a female POV?

I didn’t really think much about it, to be honest. I’ve written from a female POV before–Jess Chambers from The Reach in particular, although Angel from my first novel Bloodstone comes to mind as well. It’s never given me much trouble. In fact, I’ve had quite a bit of reader feedback from both those novels, people who tell me they’re amazed at the job I did with the female leads. That’s the best compliment I could imagine.

What advice would you give to new published authors (something you didn’t know until you became published) that would be helpful to them?

Be patient, and learn the craft. Listen to others who have been there before, and understand that it’s a business, that you have to treat it like that, and not simply think you’ll lock yourself away, write books and everything else will take care of itself.

When have you written a scene that scared you? How did you complete the scene?

It doesn’t happen very often, but I did write one in Bloodstone that freaked me out. I was by myself late at night, it was raining hard, and I was writing a scene where a man is alone in a jail cell during a storm, the power is out, and his dead wife comes back to claim him. I remember getting chills as I wrote about him hearing a noise, a clanging, the soft sound of bare feet on concrete; watching during lightning flashes as he thinks he sees something shuffling toward him. But the most frightening part of the entire scene was that a part of him WANTED her to come back, regardless of the consequences. And he had killed her. That was what really got me.

The scene pretty much wrote itself. I sort of lost myself in it, but I remember sitting back after I ended the chapter and looking around my office, turning on lights and trying to settle down. It took a while.

Just wanted to say thanks for the interview, and I hope readers enjoy Spectres! I’m always happy to hear from fans, who can email me at nate@natekenyon.com. 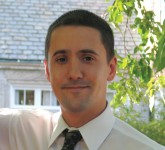 Nate Kenyon is the award-winning author of Bloodstone, The Reach, The Bone Factory, Sparrow Rock, Prime, and StarCraft Ghost: Spectres. His work has been called “superb” (Publishers Weekly) and “masterful” (Booklist). He is a three-time Bram Stoker Award Finalist, and two of his novels are being developed as major motion pictures. He is currently writing a Diablo novel for Blizzard Entertainment (February 2012), and a new thriller for St. Martin’s Press.

Kenyon is also currently writing a Diablo novel for Blizzard Entertainment (February 2012), and a new thriller for St. Martin’s Press. To learn more about him, please visit his website, Facebook, and Twitter.

Miranda Parker
Miranda Parker is the author of A Good Excuse to Be Bad, Book 1 in the Angel Crawford Bounty Hunter Series. This former entertainment reporter has written over fifty features articles for various magazines and spent many years as a publicist for national recording artists, actors, ministers, and authors. However, writing fun, fiesty, redemptive bad girl gone good stories is her passion. Now Parker writes southern romcom suspense for Kensington Publishing Corp. She resides with her family in Georgia near a horse ranch and her daughter's Girl Scout Troop.