Did Not Finish is a book that is very close to my heart as it’s a mystery centering on the world of motorsport.  Twenty years ago, I raced open-wheel cars motorsport in the UK.

In the book, a death threat is circulating around the pits.  Derek Deacon says he’ll kill his championship rival, Alex Fanning, unless Alex throws the championship deciding race.  Rookie driver, Adrian ‘Aidy’ Westlake, doesn’t put too much stock in the threat.  He figures Derek is just playing mind games.  That changes when Alex dies on the track after banging wheels with Derek.  A cover-up ensues.  The police wrap up their investigation without following up on the death threat, TV coverage omits the crash and the racing community seems happy to ignore what they heard.  Aidy is the exception.  He feels obligated to expose the truth and finds himself dragged into a much larger conspiracy.

A real incident is the basis for Did Not Finish.  I was competing in a regional championship where a rumor was floating around the paddock that a driver threatened to kill the championship leader if he didn’t win and, just as in the book, that driver died in a crash during the race.  At the time, I felt quite helpless.  There is a world of difference between an idle threat and an actual murder.  What made the situation even harder for me to accept was that minutes before the race started, the driver who died had shared something with me that he hadn’t even shared with his family.  It’s a confidence I’ve kept for twenty years.

Did Not Finish is not an attempt to expose a crime or rewrite history but illustrate life in the fast lane.  Motorsport is an expensive game.  To compete, you need more than just a bat, a ball and a pair of sneakers.  You need a small army.  Even at a grass roots level, it costs tens of thousands each year to own, maintain and race at a competitive level.  Because of that, the desire to win gets amped up and tensions run high.  Competition brings out our best, but it can also bring out our worst, so dirty tricks aren’t out of the question.

Naturally, there’s rule bending in motor racing and I can’t say I didn’t pull some stunts to help me survive in the sport.  Other people I knew took more drastic measures, especially when it came to money.  Some people borrowed heavily, in some cases turning to loan sharks.  Others got involved in a variety of criminal pursuits to make ends meet.  They ranged from misdemeanors such as theft to major felonies such as drug trafficking.  Some individuals felt they had to protect their interests and did so by intimidating others or flagrant cheating.  Some of the stuff that occurred is enough to make your hair curl.  And in most cases, all these acts boiled down to people doing anything to hang on to their dream and win.  It’s a siren song that’s hard to ignore.

Dick Francis showed the dark side of the world of horseracing, I’m hoping to do the same through Aidy’s adventures.  He lives in the shadow of his famous father, the late, great driver, Rob Westlake, who died along with Aidy’s mother in an auto wreck after securing a Formula One contract.  Raised by his grandfather, Steve, himself a retired Grand Prix mechanic, Aidy is following in his father’s footsteps.

As the series develops and Aidy makes his rise through the world of motor racing, he’ll be drawn into the various issues affecting the sport.  And as he does, he’ll learn one thing—in motorsport, murder will always happen breakneck speed. 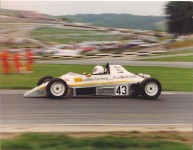 Simon Wood is the author of numerous books and articles. His debut novel ACCIDENTS WAITING TO HAPPEN was nominated for a Bloody Dagger award for Best Thriller. He has written over 130 short stories and articles. Originally from England, he moved to the US in ’98. His wife, Julie, is American, but don’t hold it against her. Their lives are dominated by Royston, a longhaired dachshund, and two cats, Bug and Tegan. He was a competitive racecar driver and is a licensed pilot.