B.Kent Anderson has a wonderfully beautiful way to turn a gentle phrase on an ugly time in history-the Civil War.  His words lilt and melt in your mind as you read them.  Part history lesson, part poetry and part thriller, Anderson has joined the three with as much richness as the South joining the North.

In his latest novel, Cold Glory, Anderson rebuilds the time in history in which General Robert E. Lee surrendered his army to General Ulysses S. Grant.  He plants himself as a fly on the wall to hear the fictitious final conversation and to read a secret agreement between the two warriors, enemies, co-conspirators.  And the book, Cold Glory is born.

It would seem that Anderson can finally be at peace as an author.  He readily admits that in his early efforts he accumulated as many as 300 rejections to get his first four novels seen by the right eyes.  But he is a study in perseverance and his magic bullet has been fired from atop the platform of American History.

Much like the Bible, American history has really cool stories.  “History is fascinating and loaded with intrigue,” Anderson says.  “History is filled with possibilities for stories, and since right now I’m focused on the American Civil War era, it is such fertile territory for a thriller writer.”

So Anderson dissects sections of real history and transplants them into circa-present-day to weave a story about legacy soldiers who believe it is their duty to right the wrongs of history.

The basic plot starts with the unearthing of a Civil War document.  Its discovery signals a coup to be executed by a band a historical throw-backs who believe the checkered flag has been waived from the grave-the end of the war is the beginning of the war.  They believe they’ve been called to take over the United States and restore it to its proper form of government.  But there’s a catch.  They’re missing the final page of the document with the signatures of Generals Lee and Grant. There’s only one thing to do-get that signature page.  But standing in their way is a history professor who doubles as something in the order of an archeological-sleuth.   While the professor is trying to make short work of the meaning of the found-documents, this group of rebels is trying to make short work of him.  What ensues is a game of intrigue and chase that winds the reader around a maze of history and imagination.

“I am a storyteller.  I want readers to lose themselves in the world I’ve created for a few hours or a few days.  I want them to care about the characters, to wonder what’s going to happen next… to be emotionally invested in the story,” Anderson says about Cold Glory.  And it doesn’t hurt if the reader learns a little history along the way while being swept away by a currant of captivation.

Nick Journey, the history professor unwittingly becomes detective and hero as he defends the found-documents and tries to decipher their meaning while accidentally stumbling into a nest of cuckoos who think it’s their duty to overthrow the government of the United States by any means necessary-and it would appear that assassinations of high ranking government officials will be necessary.

Based on the state of today’s government, the plot is plausible.  A great section in the book reads,

…these people think they have a legal right to suspend the Constitution and basically overthrow our government! I mean, our government’s not very efficient, I realize…

Hell, I work for it and I know that. But we don’t have coups in this country. Russia, Bulgaria, Pakistan, Chile, maybe, but not here.”

A journalist by trade, B. Kent Anderson promises he’s not promoting any political agenda.  He’s just thrilling us with a good yarn.  “I’m just spinning a story.  If it makes people think about things they haven’t considered before, that’s a wonderful bonus.”

Cold Glory is also a love story between a father and his son who has profound autism.  A flawed man learning to accept himself as he is.  And a lonely man, sticking his toe in the water to test the temperature for romance.  And while there seems to be similarities between Anderson and his main character, Journey-Anderson will tell you Journey is the more brave of the two.  Yet, as B. Kent Anderson makes a foray into the historical thriller genre, he too is exploring new territory-engaged to be married, three sons and new serial characters in Nick Journey, and his accidental partner in crime-solving, Meg Tolman, a Federal agent by day, a tough-talking, classically trained pianist who uses the ‘F’ word as a muse when cracking computer codes during her off time.

“The sequel to COLD GLORY is in my editor’s hands now, and is set for publication in the fall of 2012.  As we speak, I am in the ‘reading research’ stage of the third book in the series.  I think Nick Journey and Meg Tolman have many more adventures ahead of them, and am looking forward to telling those stories.” 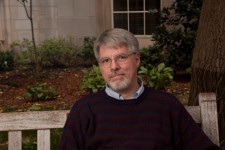 B. Kent Anderson spends his days in Oklahoma City, writing features for a local magazine and programming music for a classical music radio station.  But his first and true love is writing.  His previous novels have been mass market, contemporary thrillers all paperbacks, all published under a pseudonym.  He’s happy to say that Cold Glory will be in hardcover, published by Forge, released in October of 2011.

And while B. Kent Anderson appears to finally be at peace as an author, he is apt to tell you, “The Peace may well be more violent than the war”.

To learn more about B. Kent Anderson, please visit his website.