At a prison in Nebraska, the government is experimenting with time travel, but their supercomputers are accidentally cross-wired with a new electric chair. Curtis Beckett, a condemned, yet innocent man, is sent to 1957. In the past, he solves the murders and meets the love of his life.

“Time-Crossed Lovers is Karl Alexander at his best. It’s as romantic as his brilliant Time After Time, and edgier, too. If you like a clever story that plays with time itself, keeps you on the edge of your seat and pulls at the string of your heart, this book is for you.” –T. Jefferson Parker, author of THE JAGUAR and THE BORDER LORDS 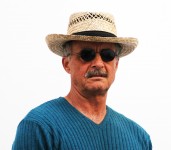 Karl Alexander is the author of six novels. Two have been made into films, including the best-selling “Time After Time,” a classic Warner Bros film. He is also a screenwriter.

To learn more about Karl, please visit his website.