Special to the Big Thrill by Andrew F. Gulli

It was hot and humid in New York, not many of you will remember the 2005 edition of BEA, but I will for many reasons…

For starters it was the first BEA I attended (and so far the last) and also, I was so damned tired from talking non-stop, shaking hands, and being stuck in that sauna of germs the Javitz Center, that on the airplane journey back home, I was struck with a flu which was biblical in its severity. Being on a runway for three hours and for another three hours on a flight that usually took 90 minutes didn’t help.

A distant memory from that stifling trip that today shines brightly was welcomed by the ITW. I had arranged to see my friend Joe Konrath at the Javitz, “Hey, Andrew you’re coming to the party right?” he asked.

“I’d hate to crash the party.”

“Don’t be silly, you’re coming as my guest, okay?”

That evening, I tiredly blundered my way from one street to another until I found myself in the Algonquin hotel. I went upstairs. Joe and Chris Grabenstein were near the entry way, introducing me to a bunch of authors. While I was getting a drink, I heard a voice, “Are you from Athens?”

I turned. It was Tess Gerritsen, “Chris told me you lived in Athens.”

We spoke for a long time. Then I ran into John Lescroart, he’d read the Strand Magazine before and was a great Sherlockian. I also spoke briefly to Michael Palmer. I went back to my hotel and slept like a log.

Little, did I know that were it not for that party, No Rest for the Dead wouldn’t have been a reality. Over the years, I’d become friends with John and Tess and when I first had the idea for No Rest for the Dead, John and Tess were the first two writers I contacted and within hours both of them said they’d be honored to be a part of the book, I’d like to think it was because I was editing the book, but most likely my pledge to donate all proceeds to the Leukemia and Lymphoma Society helped. 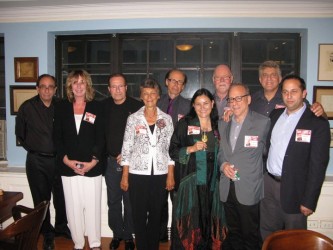 I don’t know if I’ll ever work on another serial novel; it took over large parts of my life and was to say the least stressful. I had a great partner in my sister who co-edited the book with me, without Lamia’s great editing skills the book wouldn’t be the great read it is today. We both worked on this to honor our parents who died of cancer, so it can be described as a labor of love. What was especially heartwarming for us how easy and understanding the authors were, how egos never were involved, and how they conspired to write a hell of a book!

To learn more about the No Rest For The Dead launch party, please visit Strand Magazine online.

The Evil Inside by Heather Graham