Getting kidnapped isn’t my idea of a party. I’d rather barbecue. In fact, I’d rather spike my hand to the floor with a nail gun.

But some people are eager to let strangers grab them off the street for fun. And adventure companies are happy to do just that. They sell “designer thrills” to adrenaline junkies. For $1,200, French outfit Ultime Realité will kidnap you. For a few thousand dollars more, they’ll take you on a helicopter chase or let you spend a night in a morgue. They’re even willing to bury you alive.

The idea behind extreme reality games is to let players confront their deepest fears: to script a live-action nightmare and call it a dream come true. These games are perfectly legal, as long as the adventure company warns the police beforehand so the cops know to ignore any emergency calls. Of course, they’re deeply unreal. It’s impossible to create your own reality and control it. Life ain’t like that.

As for the cops ignoring people being abducted off the street: If I were a kidnapper, I would consider that an open invitation to hijack a designer adventure and turn it into my personal jackpot.

And that’s the starting point for The Nightmare Thief.

In the novel, Autumn Reiniger gets a special twenty-first birthday present from her father: a mock crime spree. She and her friends get to play-act their way through a simulated drug deal, jailbreak, and manhunt. It’s a high-priced version of cops and robbers, played with fake guns and fast cars on the streets of San Francisco. Edge Adventures alerts the SFPD ahead of time that a “crime simulation” is underway, so the authorities can ignore the squealing tires and desperate cries for help.

But Autumn’s father often uses Edge scenarios to test the mettle of his hedge fund traders. He confronts them with panic-inducing situations to see how they respond to fear. And Autumn doesn’t know that her dad has asked Edge to do the same with her mock crime spree—to add a character called the Bad Cowboy so Autumn can challenge and overcome what he considers a childish phobia.

But the Bad Cowboy isn’t a clown. He’s something much worse.

And none of them know that a criminal gang is shadowing the Edge team, planning to commandeer the scenario and hold Autumn for ransom.

Meanwhile, forensic psychiatrist Jo Beckett is investigating the death of a lawyer whose body has been found deep in the Sierras. Jo and her partner, combat medic Gabe Quintana, find themselves on a collision course with Autumn and the kidnappers. Before long the game turns vicious. And in the wilderness, every time you turn around something’s waiting to kill you. Soon Jo and Gabe are fighting to keep Autumn’s group, and themselves, alive.

And all the twists Edge has secretly designed into the scenario come back to haunt them.

In The Nightmare Thief, terror breaks out of the script that’s been written for it. And it traps Jo, Gabe, and Autumn’s group in the wilderness, battling to escape. Because, when a dream becomes a nightmare, you can wake up. But when a nightmare becomes real, where do you run? 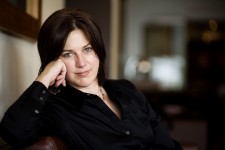 Meg Gardiner is the author of nine thrillers, including Edgar Award winner China Lake. Originally from Santa Barbara, California, she lives in London.