No, no, not that kind of girl. This is an abandoned baby girl.

So he hands the girl to the cops, right? Wrong, because Gidney started life the same way—abandoned. But unmarried private eyes aren’t usually thought of as ideal parents. So now Gidney needs a lawyer, and that means money.

This is the premise of Steal the Show, the second novel by Emmy award-winning motion picture director and cameraman (and now writer) Thomas Kaufman.

This sequel reprises wisecracking PI Willis Gidney, the wonderfully textured protagonist that Thomas introduced us to in Drink the Tea, which won the 2010 PWA Award for Best First Private Eye Novel. Publisher’s Weekly called Drink the Tea “a taut, compelling tale of violence and corruption” in a starred review. Gidney’s first outing had him dealing with Washington DC’s jazz scene, cut-throat big business, and the destructiveness of reckless ambition. Author John Lutz says: “Drink the Tea is a top drawer P.I. novel that will keep the reader hooked cover to cover. Author Thomas Kaufman knows his stuff. Let’s see more of his D.C. detective Willis Gidney.”

And now we can. In the sequel, Gidney again becomes involved with the business end of town through piracy in the movie distribution business, while dealing with the more human dramas associated with the child welfare system in Washington. Steal the Show has Gidney once again with his heart in the right place and his head on the block. Forced by economic necessity to commit a felony (hey, what’s a little felony between friends?), Gidney is blackmailed into helping his client further, and incurring the wrath of Vietnamese and Salvadoran crime gangs.

Thomas’s second novel, like the first, has been extensively researched, but the facts are not intrusive, just woven into the plot in the manner of a writer knowing his stuff. Thomas says it’s important that writers talk about issues that concern them, but they should never ignore the entertainment side of the business. “The writers I like convey their personal outlook through character and plot. In this way, point of view is woven into the story and reflected through the eyes of characters.  And entertainment?  That means holding someone’s attention.  If we fail at that, we may as well forget the whole thing.”

Perhaps that attitude comes from Thomas’s lifetime in the movie business. Regardless, there’s no denying that Thomas’s two novels are great entertainment. Author Steve Hamilton describes his style as “fast and funny, with a huge heart.”

Even if you’ve not read Drink the Tea, you are thrust inside Gidney’s character from page one. Thomas has made sure that reading the two books out of order doesn’t spoil the experience, because he’s given Gidney’s back-story a different treatment in Steal the Show.

I asked Thomas about the pressure of writing the second book after winning an award with the first. “I’m definitely more excited about the second book, because I can see that folks liked Gidney and want to read more about him. But in some ways I felt more pressure, because I wanted to do more, and felt this was a chance to let Gidney strut his stuff.”

Writing is quite a different experience for Thomas than being a cinematographer. “Life on the film set is very intense, and I work closely with the director and other crew folks. So the time alone writing is wonderful for me.”

Still, working in the movie business brings out some useful qualities for Thomas in his writing. “Years behind the camera have given me a visual sense, and I try to use that when I write a scene. In the second draft I’ll try to make the scenes more visual. Ideally, reading the book should be like watching it play out on a screen. So I try to pay attention to body language, facial cues, and the ‘blocking,’ the way people move in context to one another.”

One of Gidney’s most endearing qualities is his sense of humor. It helps the reader to not only get inside his character but also to empathize, something which is so important with any protagonist, but even more important with a series character.  “Humor is part of Gidney’s coping mechanism, it helped Gidney survive the childhood from hell, so maybe he’s earned that cynical outlook. It’s hard for me to imagine Gidney without it.”

While Thomas admires other writers who use detailed outlines, his writing is more a journey. “It’s like a road trip. I know which direction I’m driving, where I’m going, but I don’t know which roads I’ll take, not yet. I find that out as I travel. Occasionally I make wrong turns, but I can always retrace my steps if I have to.” 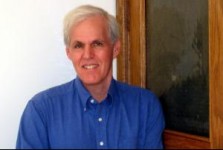 On the process of editing, Thomas is equally candid. “I wind up creating an incredibly rough first draft, then lots of polishing.  One thing I learned from Michael Seidman’s book FICTION, is not to look at the screen when you’re writing the first draft. This is one of the best pieces of advice I’ve ever read.  I mean, when I first came across this advice I thought it was some kind of mistake, a typo. But I kept thinking about it, and now it’s the only way I write a first draft. By blocking the screen from my own eyes, I can write and let the words flow. I can always go back and fix things later.”

To learn more about Thomas Kaufman, please visit his website.

House of the Rising Sun by Chuck Hustmyre