“A late night fog fluffed over Decatur and my windshield. The only thing I saw was Big Tiger’s Trusted Bail Bonds’ chalk white office gleaming through the muck. I wished I could turn around and have Justus ride along, but not tonight, not anymore. I sighed. This was not the time to fall in love with a good man.”

Former investigative journalist turned Atlanta bail recovery agent “Angel” Crawford is busy raising her daughter, trying to make ends meet and attempting to get thoughts of her sexy new pastor, Justus, out of her mind. Then her twin sister Avalyn shows up on her doorstep with her children in tow and hours later Avalyn’s husband, a prominent bishop, is murdered. Angel’s reporter instincts kick in and she must work fast to clear her sister’s name, and enlists Justus to help bring the killer to justice.

“With a surprise around every corner, A Good Excuse to Be Bad will keep readers on their toes. The combination of a juicy mystery and the drama of a mega-church is an unbeatable one that makes this novel a real page-turner,” according to RT Book Reviews Magazine

“This novel has been a long time coming, and there will be many more knock-outs from Miranda Parker—one of the brightest authors on the horizon.” —Creston Mapes, author of Dark Star and Nobody (Random House)

“A Good Excuse To Be Bad kept my eyes glued to the pages. Evangline “Angel” Crawford is a no-nonsense type of woman who will do whatever she needs to do to get the job done.  Readers will love Angel’s quirky personality.  Drama doesn’t find her, she chases it.” -Shelia Goss 2011 Great Summer Reads.

This month debut author Miranda Parker chats with ITW about the growing buzz behind her summer romantic thriller and how her own journalism background played a role in the genesis of the series.

What’s the story behind A Good Excuse to Be Bad?

A Good Excuse To Be Bad is the first book in the Angel Crawford Bounty Hunter series for Kensington Books. It is the story of mom and bounty hunter Evangeline “Angel” Crawford, a bad girl gone good who may have to go back to being bad, in order to save her sister from taking the fall for the murder.

How did you come up with the premise for your book title?

My editor, the great Selena James of Kensington Books, brainstormed with me for a few days on this title. We wanted the tag line for the series to be Every Nice Girl Wants One, but then what does every nice girl want? A Good Excuse to Be Bad, of course. It was perfect for Angel’s dilemma. She worked in a profession that constantly put her in front of people who made constant bad decisions. Hanging around that world makes it tempting to not always follow the straight and narrow. But the desire to be a great mom for her child kept those temptations at bay. So she never had a good excuse to return to her ride-or-die ways. When her twin sister gets in trouble, then… you know.

Why did you decide to write romantic suspense?

I don’t know if I call this romantic suspense or character driven suspense (if there’s such a term.) When I brainstormed this story I wanted a fast paced, action packed story that was set in a woman’s world, particularly a mom’s world. We moms can’t work without tagalongs (family responsibility, parent drama, keeping our significant other happy.) I really wanted to write a series that required the heroine to be grounded in a very normal, boring world. I thought it would be funny. Didn’t have a clue how hilarious Angel’s family would be. It makes writing these stories so much fun.

Did you have to do quite a bit of research for this novel? 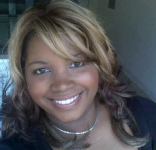 I questioned local bounty hunters in Georgia and DeKalb County Police about the probability of events in the story and how the bail bonds process works here. When I reported for a local newspaper, I wrote a few articles years ago about the IRS’ investigation of two Atlanta megachurches and the rise of Armor Bearers as security forces in nondenominational megachurches. These stories became the background I needed to flesh out my story. On the other hand, I am a twin, so that didn’t require special research. However, my twin does want my readers to know that he is very much an alpha male, not a fashionista like Angel’s twin Ava. lol

I also made some interesting discoveries, while writing this book (i.e. bail recovery agent laws in Georgia.) I didn’t realize how many people that live among us have outstanding warrants and have skipped bail, but haven’t been tracked down. With the police force staff reduced and the city’s detention centers over crowded many jumpers fall between the cracks. You never know you’re living beside.

Moreover, I learned that some lobbyists sponsored “kept women” for certain members of Georgia’s legislature. I would like to do another story outside of the series just about that discovery.