MANY GENRES, ONE CRAFT: LESSONS IN WRITING POPULAR FICTION features 65 essays on writing genre novels for success in the mass market. All the contributors have taught or studied at Seton Hill University’s unique MFA in Writing Popular Fiction program, including such award winning thriller and suspense writers as Tess Gerrittsen, David Morrell, Michael Arnzen, Gary Braunbeck, Victoria Thompson, David Shifren, Pat Picciarelli and many more. Divided into sections on “Craft” “Genre” and “The Writer’s Life,” the book covers the entire range of the profession.

Michael Arnzen and Heidi Miller are colleagues at Seton Hill University and both teach writing.  Their collaborative effort, Many Genres, One Craft, was just published by Headline Books.  This collection of essays is a perfect addition for the creative writer’s bookshelf.  They both took the time to talk about their book and the process on its creation.

How did you and Heidi team up?

Arnzen: Heidi and her husband Jason graduated from the Master’s program in Writing Popular Fiction at Seton Hill University where I teach, and as local writers we’ve developed a friendship over the years.  Now she’s teaching summer writing courses at SHU, and we routinely get together over coffee to  talk shop about publishing and writing.  I’ve always wanted to do a book like Many Genres, and when I shared this idea with Heidi and we started talking it up, we both got so excited and we realized this book just HAD to be created.  I thought it was important to make the collection not just a reflection of the teachers I work with but also the students who really give our program such personality— and Heidi is such an active alum that, together, we were really able to connect with the whole community in our  program at SHU.

Miller: The writing community we have is a dream—so many resources, always someone to inspire, give advice, and offer extra eyes. I couldn’t have imagined a better environment for an up-and-coming writer when I started there in 2005. Now, I get to give back a little with this book.

Arnzen: Ultimately, that’s what we were able to capture in Many Genres: that sense of community.  And it just “works” because that’s one thing that makes genres what they are:  communities with common affinities.

What sparked the idea for the book?

Miller: It was all Mike.

Arnzen: I think the idea for putting together a collection of instructional advice by writers in our grad program—when it was just a little seedling in my brain, years before I even shared it with Heidi—first struck me when I was helping the faculty put together a manual for the students.  New students get a little booklet of guidelines for what they need to do to get their MFA, from basic class requirements to tips on writing a synopsis and cover letter.  Different faculty had chapters in the manual that described  each genre, with recommended readings, and as I was working up the “Horror” section, I thought:  this could really be a guidebook for anybody who writes, if approached in the right way.  That seed had taken root over the years, and when Heidi and I brainstormed about what we could really do together, it blossomed into something distinctive and wonderful.  While it’s not a “manual” by any means, Many Genres is still modeled off the course structure of the graduate program, with an emphasis on general craft issues, then specific genre skills, and also advice on living the writer’s life.  Every contributor to the anthology is a faculty member, guest writer, or successful alum from the program.  We have a really vibrant alumni group (who hosts their own “shadow” workshop during the program’s residencies, which anyone can join), and publishing their essays in this book really is a point of pride for me, because their passion for sharing what they’ve learned really comes beaming out from the page.  I think it’s contagious.

How did you divide the work between the two of you?

Arnzen: As collaboratively as possible. “Collaborative editing” is a little different than collaborative writing, but we met frequently and shared a lot of emails to both divide work and put our heads together as often as we could.  We constantly bounced ideas off one another, which was the fun part.    Heidi graciously handled most of the business communications and kept us really organized as the manuscript came together; she also took charge of a lot of the initial marketing—indeed, she found us our publisher— and now she’s really doing the lion’s share of the publicity for the book. Without Heidi, this book would not exist.  My role was more editorial and advisory, I think, especially with the first drafts of the contributors.

Miller: I was an educational marketing director at a Frank Lloyd Wright house so I naturally applied the tricks I had learned through my work experience to the Many Genres publicity campaign. The Virtual Book Tour (VBT) we launched in April is ongoing through July. By the time we wrap it up, I estimate we’ll have 500 individual posts from our dozens of hosts. It was incredible how many blogs signed up for the VBT, and we tried to make each post as unique as possible, from talking about pseudonyms to sharing recipes to providing writing prompts.

Were there any essays you were not able to put in the book?

Arnzen: Only one or two, and they were usually short memoirs or essays that didn’t have an overt lesson to teach about genre fiction. Most of the contributors pitched ideas to us, or looked over our rough breakdown of the parts and came up with things based on areas we needed to fill.  The more widely-known writers were directly solicited for things, including some reprints here and there of work we felt really deserved a wider readership.

How did you approach the various writers for new material as well as the reprints?

Arnzen: We sent an open call out via email to a list of alumni we got from the college and also reached out to all faculty, adjuncts and guests we could find contact information from.  Several people pitched multiple ideas. We already had the working structure for the book with craft (all the elements of fiction: plot, character, setting, etc.) and genre (all the big ones we teach) and a generic section on the writer’s life.  As responses came in, we clustered articles together, and if we saw a gap, reached out to people we knew who were specialists to see if they would want to write about the topic, or to allow us to reprint something we’d seen elsewhere before. And if we couldn’t find a writer to cover a topic, we did it ourselves.  It emerged organically, but everything seemed to fall right into place.

Miller: The process worked so well with no real overlaps, and that’s saying something considering we have sixty-five contributors! Of course, these are professional writers we were dealing with so even when we asked for tweaks or completely new ideas, they were quite accommodating.

Why does the idea of genre appeal to both readers and writers?

Arnzen: I contributed a chapter in Many Genres on this topic, called “Genre Unleashed.”  It’s one of the longer and more philosophical entries, because genres are tricky and fuzzy things.  But ultimately, they are like “safe zones” for the imagination to play in.  I think we are attracted to genres instinctively—once we experience a few texts in a genre we start to look for more of them—and it becomes a sort of “home” for us in the bookstore, the movies, the library…and anyplace where we go to let our imaginations run wild.  Most genre writers I know start out as die-hard fans, who decide to pick up the pen and “play along” with the folks they’re reading.  New writers shouldn’t forget what genres do for us emotionally; sometimes we get too caught up in networking and marketing and start to see the genre as a target audience the way a salesman would, rather than as an audience of readers.  While it’s true that writers need to connect with other members of their genre community (through writers groups, conventions, and so on) to network, connecting with your “kindred spirits” will not only help you navigate the marketplace, but build relationships with friends who identify with your needs as a writer because they share them.  That kind of bond could last a lifetime.

Miller: I was amazed how much I learned from these articles. As they came in, I found myself jotting down notes for the classes I teach and using some as affirmations for my own writing. I still reference Anne Harris’ “Perfect Disaster: Don’t Let Perfectionism Squash Your Creativity” because as the title suggests, she taught me how to let go of a piece of writing without the endless tweaking. Also I have directly applied the advice from Susan Mallery’s “Writing More” to boost my daily word count. It means a little more shoulder pain, but I’m so much more productive!

Arnzen: Thriller writers might like to know that they’re very well represented in the book…in fact, the book might lean more favorably toward thriller writers than anyone else.  Victoria Thompson’s essay on  plotting the mystery is the clearest I’ve ever seen on how to build a tricky story that will keep the reader guessing “whodunit”. I’ve got one in the book on “surprising” readers with diversionary tactics.  David Morrell has an inspiring contribution on writing thrillers with a purpose.  Tess Gerritsen has a reflection on trusting her gut and choosing a shift in her genre focus. David Shifren has a piece on “talking the talk” that delves into proper “copspeak.”  Others by Pat Picciarelli, Mary SanGiovanni, Gary Braunbeck, Tom Monteleone, Tim Waggoner, and more give a thriller writer a lot to chew on.  Visit our weblog to learn more. 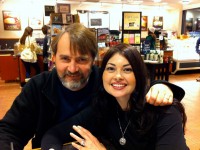 Michael A. Arnzen teaches in Seton Hill University’s MFA program in Writing Popular Fiction. A four-time Bram Stoker Award-winning author, Arnzen has been publishing genre fiction for over two decades. His books include Proverbs for Monsters, 100 Jolts, Grave Markings, The Gorelets Omnibus, and The Popular Uncanny.

Heidi Ruby Miller is adjunct faculty at Seton Hill University where she graduated from their Writing Popular Fiction Program. Her novels include Ambasadora and the upcoming thriller, Atomic Zion. Visit her at heidirubymiller.blogspot.com to read her author interview series.

For more  information and bonus features, please visit the author’s blog, Many Genres, One Craft, and don’t forget to check out the Virtual Book Tour!