Maureen Coughlin, a New York City cocktail waitress, sees something she shouldn’t involving a co-worker and a local politician. When her co-worker turns up dead the next morning, Maureen goes on the run through the seedy underbelly of Staten Island, to protect herself and her mother.

It’s hard to believe that Bill Loehfelm’s new novel, The Devil She Knows (May 2011), is only his third.  It seems like I’ve been reading, and re-reading, his books forever.  Fresh Kills (2008) and Bloodroot (2009) go on a very short list of books I’ve read twice.  I like to spend time in Bill Loehfelm’s gritty, yet strangely beautiful, Staten Island (although I’ll admit that I’ve never actually been to Staten Island).

It also seems like I’ve known Bill forever.  He’s lived in New Orleans for a couple of years longer than I have, but we’ve both been here well over a decade.  We share a love of Crescent City music and food, as well as a passion for great books and baseball.

Bill’s new novel, The Devil She Knows, is the story of Maureen Coughlin, a thirty-ish cocktail waitress stuck in a rut of working and partying, until she catches an aspiring political candidate, Frank Sebastian, in a compromising position with her coworker.  The coworker quickly ends up dead, and Maureen finds herself on the run from Sebastian.  That is, until Maureen decides to get the upper hand.

Bill asked if I’d like to pose some questions about his new novel, and I naturally jumped at the chance.

Your new novel, The Devil She Knows, is a bit of a departure, in that the lead character is female.  It’s unusual for a male author to create a believable female lead, I’ve discovered, yet you pull it off brilliantly. Why’d you choose to make the lead female, and how’d you do it?

I chose Maureen in particular, more than I chose to write a female lead. She’s a character I’d worked with already. I believed in her. She deserved a book. I thought the female characters in my first two books were strong; I’d always been told I wrote women well. That gave me the confidence to write a female lead. That’s the why. As far as the how, I focused on creating Maureen Coughlin, an authentic, believable person. I didn’t worry about whether she sounded male or female. I put my effort into making her a person, not making her a woman. The essential question was “What would Maureen do, or say, or want?” Not “What would a woman want or do or say?” She’s a person, not a symbol or an avatar or a metaphor.

You tended bar for a few years.  Did you meet a lot of Maureens, young but no getting younger women who feel trapped, along the way?  And how much of Maureen is you?

Every joint seems to have one two Maureens: the smart, driven unguided missile of a person that once you get to know them you’re like “You’re so smart. You work so hard. What’re you doing here?” You find that at some point the floor fell out from underneath them and they’ve been treading water ever since. It’s a hard life, the service industry, but it’s a hard life to walk way from — the cash in hand, the flexible hours, the personalities. The illusion of excitement is a strong one. There’s a bit of me in Maureen, I guess, definitely in some of her observations about the business and in her exhaustion from working all the time. It can definitely be a trap.

This is your third novel set in Staten Island.  You make it sound so beautiful and ugly at the same time.  How do you feel about the place after so may years living away?  Does absence make the heart grow fonder?

It’s a place committed to a very conservative, traditional lifestyle: married, house, kids, 9 to 5 job. Always has been. I knew early that wasn’t what I wanted and rather than fight that, I left. There’s a lot of clash on the Island, a lot of dissonance. There are pockets of great natural beauty, hiking trails and beaches and parks that seem right around the corner from suburbanish stripmall traffic and ugliness. I think in the end I have a pretty typical ex-pat’s reaction to his hometown: mixed feelings that never quite settle. It’s the way the Island sees itself. I’d never move back, but I also hate that the place is a constant punchline for people that have never even been there. When that happens, I want to defend it.

You’re one of the most disciplined and productive writers I know.  What’s a typical writing day like for you? 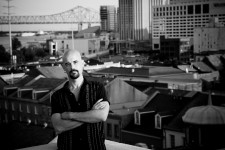 My writing days happen at night. My workday is usually from 10 PM and 4 AM. If I’m on a roll with a project, I’ll work in the afternoons as well. Maybe some editing or going back over what I worked on the night before. I think the important thing is I try to put in four or five nights a week, to be consistent. I’m not a believer in the mysterious, ephemeral muse. At least, not for me. My muse looks like Rosie the Riveter, and she likes to work.

The importance and the difficulty of family relationships is central to all three of your novels.  Yet you’ve said your own family life has been pretty happy.  Where did you find your inspiration for your troubled characters?

Even happy families have trials and conflicts, times when things weren’t so great. So I can draw on what would’ve happened had the ship sunk instead of righting itself. Maybe I write alternative family histories, I deal a lot in what if’s, like what if my parents hadn’t managed to keep their shit together all these years. Plus, my family wasn’t the only family I saw growing up. I was a quiet kid, but my eyes and ears worked overtime.

Did you have any real-life inspiration for your sinister politican, Frank Sebastian?

I did some research into corruption stories in NYC, abuse of power stories. Those stories became jumping off points. He’s not an adaptation of any one person. I wanted very much for the book to be about power: sexual, political, emotional, physical. Essentially, Sebastian’s a bully. He’s another what-if. Bullies are usually full of hot air, what if one wasn’t? What if one had the power to do all the mean shit in his heart?

Detective Nat Waters takes Maureen under his wing.  He’s protecting her, yet he also has a score to settle with Sebastian.  What kind of research did you do to create such a believable cop?

I did talk to an old friend of mine who’s been a cop for a while in NYC. That helped. But really, it’s the same answer to writing a female lead. If I created a believable person first, with real strengths and flaws and motivations and questions, the audience would believe in him as a cop. Anyone who picks up your book wants to believe in your characters. You just have to help. No amount of research is really going to teach me what it’s like to be a cop for thirty years. But to be a person that looks back with regret on some of their choices in life? Who needs research for that? So you make sure you get the regret right.

Besides writing, you’ve been doing some teaching.  How’s that going?

It goes well. I’m enjoying it. I’ve gotten so much out of being part of University of New Orleans’s MFA program. It’s an honor to be part of it now. I feel like a bit of an imposter sometimes, trying to teach other people how to write. You can only share what you’ve picked up along the way, I guess.

Is there a chance that any future work may take place in New Orleans?

The book I’m writing now takes place in New Orleans. It’s a bit overwhelming. I have to keep reminding myself that not everything I want to say about New Orleans has to go into one book. Most of my future work is going to be set in New Orleans, I think. I might go back to Staten Island and New York, but it might be for a different kind of book.

We always end up at baseball somehow.  Your prediction for the Mets this year?

If the pitching can hold up, we might make a run at the wild card. Probably wishful thinking, but that’s an essential quality for any Mets fan.

Bill Loehfelm is the author of Fresh Kills, the first winner of the Amazon Breakthrough Novel Award, and another novel, Bloodroot. He was born in Brooklyn and grew up on Staten Island; he lives in New Orleans with his wife, the writer AC Lambeth.

Ted O’Brien is a writer, bookseller, author escort, and co-host of “Writer’s Forum” on WRBH-FM/Reading Radio in New Orleans.