In examining the careers of communist and liberal actors, screenwriters, playwrights, and directors in Hollywood from the late 1920s to the present, this book uses studio and PCA correspondence, FBI files, film and theater reviews, and other sources to reveal how all of these artists were concerned with and active in the cinema of social protest.

It covers the works of those liberal stars and directors who collaborated with communist artists in New York and Hollywood, including John Garfield, Canada Lee, Frances Farmer, Paul Robeson, James Edwards, and Paul Muni; liberal filmmakers like Philip Dunne; and ex-communists (and HUAC-friendly witnesses) like Elia Kazan, Edward Dmytryk, and Robert Rossen. It also looks at the activities of the Communist Party in Hollywood and the far-reaching influence of the Soviet Union. 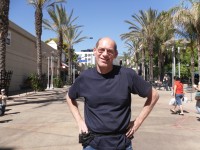 Bob Herzberg is the author of four books on film history, all published by McFarland Publishing. He is also a playwright, actor and comedian who has performed in nightclubs and theaters in both New York and Hollywood. He has appeared on TV-Land’s Myths & Scandals as an expert commentator on the FBI (He wrote The FBI & The Movies). A member of the Dramatists Guild, Western Writers of America and International Thriller Writers, Bob hopes to get his novels published, and is seeking representation. He is happily married to the lovely Colleen Herzberg.