Pleadings, briefs, memos, and correspondence all are essential parts of the job and it a rare day when an attorney does not spend some time at a keyboard.  Many lawyers think that their writing skills are exceptional and that their cases are riveting books just waiting to be written, even though neither may be true.  A difficulty is that the skills necessary for effective legal writing do not necessarily carry over to writing fiction.

The Corvelli books are set in Hawaii, where Corleone moved after giving up a solo law practice in New York.  I caught up with the author a few days after the massive earthquake and tsunami hit Japan and lesser waves washed ashore and caused several million dollars’ damage on some of the islands.

“I practiced criminal law in New York City for several years before deciding to lay down my briefcase and pick up a pen,” Corleone said.  “I was a sole practitioner and my clients ranged from prostitutes to murderers.  I actually chose Hawaii as a domicile before I chose it as a setting for the Kevin Corelli series.  Once I arrived in the islands, though, I knew my first book had to be set here.  My experience as a newcomer to Hawaii plays a large role in One Man’s Paradise.”

Night on Fire stands on its own, Corleone said, but the book also moves the series along because it answers some questions raised in One Man’s Paradise.

“I planned for Kevin Corvelli to have a long career,” Corleone explained.  “I enjoy following series, so it made perfect sense to plan one.  Just as in real life, external troubles and internal crises will always pop up, no matter what gets resolved in the most recent story.”

Corvelli barely survives an arson fire at a popular beach resort in Night on Fire, and then he winds up with the cops’ prime suspect as a client.  She’s a “troubled young bride” who also happens to be stunningly beautiful, always a risky combination, and Corvelli soon faces a serious dilemma—protecting his client while dealing with a personal relationship that quickly grows serious.

Corleone views his former career as a trial lawyer as important to his writing, both in an organizational sense and as fertile ground for ideas.

“My legal background is definitely an asset,” the lawyer-turned-writer explained.  “My years in law school and in the practice of law honed the organizational skills necessary to developing a cohesive novel.  Much of the outlining I do is in my head.  In writing legal thrillers, a writer has to become defense attorney, prosecutor, judge, jury, and client all at once.  I’m not sure I’d be able to do that without my legal background.

“I’d love to say that everything in One Man’s Paradise and Night on Fire flowed effortlessly from my imagination, but the truth is a good deal of my own persona went into the character of Kevin Corvelli.  Of course, in the novels both my strengths and flaws are incredibly magnified.  The cases in the novels are fictional, but many of the tactics stem from my experience in the law.” 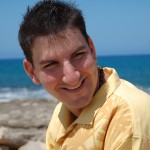 Like many successful writers, Corleone is an eclectic reader.

“If I handed you a list of the novels I’ve read over the past 10 years, you’d find a fairly broad spectrum of fiction,” he said.  “Among my favorite authors are Charles Bukowski and Hunter S. Thompson.  I enjoy the techno-thrillers of Michael Crichton and Lincoln Child.  My guilty pleasure is horror.  In fact, I have a horror novel titled The Flat being released by an independent press later this year, under the pseudonym Jack Conti.

“I’ve always been fascinated with the idea of a criminal defense attorney as hero, or anti-hero, as the case may be.  In high school, I became hooked on Steve Martini’s Paul Madriani series, and I’d always envisioned writing a novel with a defense attorney as the protagonist.  Given how we are viewed by the public, sometimes with good cause, I wanted to illustrate the other side of the argument.  We’re often conflicted, we’re flawed.  But we also do a lot of good, and we’re entirely necessary to the American criminal justice system.”

Corleone has the usual advice for aspiring writers, patience and persistence. Unlike some published authors, though, he also recommends “picking up books on the craft of writing.  The good ones are incredibly useful tools.  Most recently I read How to Write a Damn Good Thriller by James N. Frey.  These books reinforce what you already know and always add to your fountain of knowledge.”