My father taught me to swim, by throwing me into the deep end. Sink or swim. New York Times bestselling author Michael Palmer may not have thrown his son, Daniel, into the deep end of the Thriller Pond but Daniel Palmer seems destined to be an Olympic-class thriller “swimmer.”

Delirious is a thrill-seeker’s delight. It details the downward spiral of computer whizz, Charlie Giles, who is estranged from his schizophrenic brother. Giles can’t recall writing If not yourself, then who can you believe? and paranoia clutches his mind with steely fingers. Giles is accused of murder, after a “kill list” is prepared in his own handwriting. The list identifies three executives who fired Giles from SoluCent and the division Giles created, InVision, an OnStar-like device on steroids. Now, his disturbed brother, Joe, and psychologist are the only ones who believe he’s innocent.

Palmer added: “I modeled the character of a cognitive therapist after a relative who is a neuropsychologist. It was important to me that I portrayed Joe’s schizophrenia as accurately as possible, avoiding stereotypes of the disease without being overly didactic. My Uncle David, a neurologist, had just bought an Infiniti G37 and was showing me the bells and whistles. That was my inspiration for creating Charlie’s game-changing product, InVision. The story evolved from there. My second novel, Helpless, explores the dangers of teen ‘sexting’ and what happens when the Internet is used to ruin a good man’s name. Kensington will publish that in February 2012.” 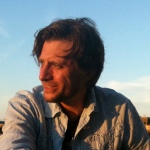 Palmer writes what he knows. “My computer background affected most every aspect of the plot. My next two novels will also explore the hidden dangers of common technologies. As for similarities between Charlie Giles and myself, I was a more empathetic boss than Charlie demonstrates. Where Charlie questions his own sanity are the most puzzling and enticing scenes.”

When asked about a key cause of writing inspiration, Palmer replied, “I credit my father, bestselling novelist Michael Palmer, for giving me my start in this business. He let me co-author a short story with him for ITW’s first thriller anthology, edited by James Patterson. That story introduced me to International Thriller Writers, a fabulous community of fellow writers who continue to inspire and encourage me.”

Palmer emphatically acknowledges another who inspired him to write: “Goodness, my wife! Stephen King wrote in On Writing how he chuckles whenever a debut novelist dedicates a book to their spouse. This is a lonely profession, and one that often requires tremendous sacrifices without any hope of reward. If my wife hadn’t given me encouragement and support during those ten years I spent writing and enduring rejection, I’d have never been able to get this novel published.”

Palmer predominately reads thrillers and named genre leaders as his favorites: “Michael Connelly, Sandra Brown, Tess Gerritsen, Dean Koontz, Andrew Gross, Lee Child…. I could go on and on. I’m not closed to any genre, but I need a story that is gripping, engaging and fun to read. I’m also a HUGE Greg Iles fan—a master thriller writer to the core.”

As a debut novelist, Palmer encourages “writers to write. If rejection stops you from writing then it’s probably not your ‘best fit’ profession. It’s not always the most talented writers who are published, but often the most persistent. To get good at this craft you have to read and write a lot. Every aspiring writer should read On Writing, the magnificent ode to the craft by the great Stephen King.”

Palmer added personal information about the task of writing. “I had one big false start with Delirious. I tried to make it ‘thrilling’ by creating an interesting and complex plot. What I found to be lacking in my story were the characters. Readers care about the plot to the extent that they care about the characters. If readers become invested in the characters, they’ll turn pages simply to find out what happens next. When I refocused my story on the relationship between the two brothers, Charlie and Joe, I found the story’s soul. I wish I could tell you that the rest of it was easy from there, but it was all really hard work.”

Main characters need motivation to be successful. Palmer said of his: “I use conflict to heighten the reader’s awareness of my protagonist’s defining characteristics. Charlie’s goal is to be hugely successful in his career. He achieves this goal by being organized and meticulous in his work. But readers really come to know him as a person when his life begins to descend into madness. Only then does the reader fully appreciate how vital Charlie’s neatly ordered world is to his identity and survival.”

As for writing and re-writing, Palmer reflected, “Michael Crichton said: ‘Books aren’t written. They’re rewritten.’ I tend to agree with that sentiment. And I write from the beginning to the end without skipping around. I try not to leave any holes in the plot, try being the operative word. The second draft is when my story comes to life. If it’s the right thing to do for the book, I can’t be wedded to my original thinking. I’m also very grateful to my editor at Kensington who spots pitfalls and other such dangers.”

It’s “open mike” at The Big Thrill. What do you care to add? “ITW is a wonderful and magnificent organization. I’m truly grateful for the opportunity to introduce readers of The Big Thrill to my writing. More about me can be found at my website, Facebook, and Twitter. I hope you’ll stop by these cyber destinations and introduce yourself as a Big Thrill reader.”

Against The Fire by Kat Martin

One Rough Man by Brad Taylor