The work of Raul Ramos y Sanchez is set in the near future – a future which represents one of America’s most terrible potential paths. As the U.S. government struggles with its immigration policy, the Hispanic population continues to grow, and extremist groups proliferate, Raul’s novels have never been more relevant. AMERICA LIBRE, his debut novel and the first book in a trilogy, has the tagline ‘out of the melting pot and into the fire.’ It’s sequel, HOUSE DIVIDED, continues the cautionary tale of a U.S. torn by ethnic strife.

In a Los Angeles barrio torn by years of ethnic war, decorated U.S. Army veteran Manolo Suarez is now a rebel leader struggling to sustain a faltering insurgency—and keep his family together and alive. His deeply-religious wife opposes the fighting. His teenage son has joined an extremist group bent on attacking innocent civilians. Now Mano must battle both a fractured country dominated by demagogues and the terrorists in his own ranks—without betraying his son or losing his wife.

Raul Ramos’ work has been called:

“A sweeping, intense novel of extremism, fear and consequences” Publishers Weekly
And

Today I have the pleasure of introducing Raul Ramos y Sanchez to discuss his new book HOUSE DIVIDED, the sequel to AMERICA LIBRE and the second of a trilogy released this January by Grand Central Publishing.

Hi, Raul, you and your writing are interesting on a variety of levels. I’d like to discuss the issues that inform your writing, but can you first tell us more about your series?

Above all, I hope my novels are engaging. I’ve been especially gratified to hear readers say AMERICA LIBRE was a real page turner yet they were surprised to find new insights into the people and history of Latin America. AMERICA LIBRE and HOUSE DIVIDED have political overtones, to be sure. But they’re really a continuing saga about a family caught in a world that’s threatening to tear them apart. It’s a nightmare world not far in the future where today’s ethnic tensions have escalated, igniting a Hispanic uprising on U.S. soil.

Contrary to what many might think, my novels do not defend illegal immigration. In fact, none of the major characters are undocumented and most are second and third generation U.S. citizens. But this assumption that AMERICA LIBRE and HOUSE DIVIDED support illegal immigration or are manifestos for an insurrection illustrates the often toxic misinformation that pervades this volatile topic. My novels are actually cautionary tales, a call for reason in an escalating war of words between extremists on both sides of the immigration issue. I also hope my work provides a more nuanced portrayal of Hispanics than is commonly depicted by the media.

Despite all the large issues you work with, HOUSE DIVIDED has a very human beginning, a far-too-short reunion between husband, wife and son. Can you tell us more about your protagonist Mano Suarez and what drives him? 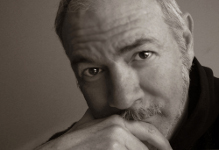 Like most of us, Mano Suarez is conflicted. But in Mano’s case, this conflict becomes a life and death crisis. A loyal, third-generation U.S. citizen of Mexican ancestry and a decorated veteran of the Afghan War, Mano finds himself forced to choose sides in a domestic conflict he had no part in creating. It’s much like the decision many West Point graduates found themselves in at the start of the U.S. Civil War. Robert E. Lee and Ulysses S. Grant were comrades in the Mexican-American War. They would later oppose each other on the battlefields of the War Between the States. Today, many Americans admire Robert E. Lee despite his decision to take up arms against his country. I think of Mano Suarez as the same kind of man, someone decent and moral with strong convictions who is forced to make a difficult decision—and live with its consequences. Another conflict Mano faces is the battle between the demands of his family and his duty as an insurgent leader. In this sense, he’s not unlike a lot of working parents. But in Mano’s case, every time he leaves home, it could be the last time he’ll see his wife and son.

As I read the excerpt of HOUSE DIVIDED it occurred to me that your work blends multiple genres. Can you tell me what the challenges are to build a believable, almost post-apocalyptic world in an action thriller, while dealing with such controversial topics as immigration?

My novels are hard to pigeonhole. The arc of my first novel, AMERICA LIBRE, turns on a romantic triangle. The emotional core of HOUSE DIVIDED is the near-universal conflict inherent in father-son relationships. Yet both are also action thrillers. In fact, some readers have compared my work to that of Tom Clancy and Dan Brown. The difference is in the political landscape. Most thriller writers center their stories on East-West rivalries, religious extremists, fanatical cults or domestic power struggles. I created a near future where the growing contemporary tensions between Latinos and the mainstream population have taken an ugly turn. In one sense, I am part of a tradition. Other novelists like Victor Hugo, Gabriel Garcia Marquez, Upton Sinclair and George Orwell have used popular fiction as socio-political commentary, though I’d hardly claim my work is in their league.

As the host of the website myimmigrationstory.com you are obviously very passionate about the subject of immigration and you consulted a host of scholars in writing the novel; why fiction and why the thriller genre as opposed to a non-fiction piece?

There’s a sad truth in our society: No one pays attention to a problem until there’s blood on the streets. So I’ve put blood on the streets in a work of fiction to help avoid that tragedy in real life. Had I written a scholarly work, I doubt it would have the potential for reaching as many people. For example, my first novel AMERICA LIBRE was recently selected as a First Place winner in the Books Into Movies Awards created by Edward James Olmos, one of the founders of Latino Literacy Now. With the support of Mr. Olmos, the chances significantly increase that my first novel will go from page to screen. Needless to say, that would widen its reach even more.

I think the best way to diffuse a crisis is to recognize our common humanity. Nothing does that better than art. Whether it’s a book or a film, drama helps us see ourselves in other people. That one-to-one connection is more persuasive than a dozen political talking points. At the same time, I felt the widespread misunderstanding of the Hispanic identity was widening the growing chasm between Latinos and the U.S. mainstream. Latinos are not a group that thinks with a single mind. We are as diverse in politics, affluence and even race as mainstream Americans. Yet the media (and unfortunately even some Hispanic advocacy groups) persists in painting the same simplistic picture of Hispanics: poor, uneducated and lacking in English skills. Hollywood is especially fond of the barrio gangbanger, drug lord, spicy señorita, and other low-life stereotypes. The Hispanic characters in AMERICA LIBRE go beyond these limited portrayals, giving readers what I hope is a wider perspective on what it means to be Latino.

I wrote a book featuring the MS-13, an L.A-based gang, and I was surprised to discover that the U.S. government played a crucial role in their formation. The U.S. armed them, trained them, lured them to L.A. and then betrayed them. When the jobless former soldiers turned to violence and crime the U.S. government deported them and thus created a drug and people trafficking channel from Venezuela to L.A. What I’m saying is that I actually felt some grudging sympathy for my antagonists even if I didn’t agree with what they did. Do you think the government has learned from its earlier domestic and foreign policy errors?

It’s almost impossible for world power like the U.S. with interests all over the globe to avoid meddling in the affairs of other nations. Indeed, MS-13 is only one of several U.S. trained paramilitary groups that have gone rogue. Al-Qaeda and the Zetas running rampant in Mexico today are two others. Despite these glaring failures, I doubt U.S. leaders (or those of any other major power) will ever be able to resist the temptation of covert military interference abroad. We can only hope that public pressure will make it a last resort.

I should add that street gangs and drug cartels are both recruited by the separatist cadres in the narratives of AMERICA LIBRE and HOUSE DIVIDED. As Hitler, Mussolini, the Sandinistas, the warlords of Somalia, and countless other demagogues have proven, street thugs can quickly become the shock troops of political upheaval.

House Divided is the second book in a trilogy. When can we expect to see the third book? What else are you working on and does it continue with themes established in this series?

The third novel in the AMERICA LIBRE trilogy is tentatively named PANCHO LAND. Without disclosing any spoilers, I will say that there is a generational shift in the main characters of the story. I’d rather not say more at this point except that PANCHO LAND is fully plotted and about 25 percent fleshed out.

Another novel I’ve completed through a full first draft is THE SKINNY YEARS, a coming-of-age story set in 1960s Miami and based on the riches-to-rags decline of an once-wealthy Cuban exile family. I’m also developing a SciFi/Comedy set in the contemporary Midwest. So as you can see, I am not locking myself down to any single genre.

The first word Raul learned in English was January, so perhaps it’s fitting that HOUSE DIVIDED is launched this month. Thank you for your time Raul and Happy New Year to all.

Cuban-born Raul Ramos y Sanchez grew up in Miami’s cultural stew before becoming a long-time resident of the U.S. Midwest. After a successful career in advertising that including founding an ad agency with offices in Ohio and California, Ramos penned two novels published by Grand Central Publishing, AMERICA LIBRE and its sequel HOUSE DIVIDED. Raul also hosts MyIimmigrationStory.com — an online forum for the U.S. immigrant community.

To learn more about Raul Ramos y Sanchez visit his website at www.RaulRamos.com.

Michael F. Stewart
Michael F. Stewart is the author of several graphic novels published by Oxford University Press Canada. 24 Bones is his debut supernatural thriller, and The Sand Dragon is his first horror novel. His next novel, Hurakan, will be released in Fall 2010. Michael lives and writes in Ottawa, Canada.