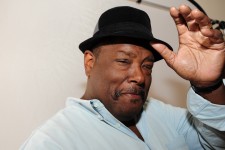 Between the Lines Interview with Reed Farrel Coleman by Brett King

Edge of Midnight by Leslie Tentler