Features, Latest Books, On the Cover
4 weeks ago
by Rick Pullen
1 0 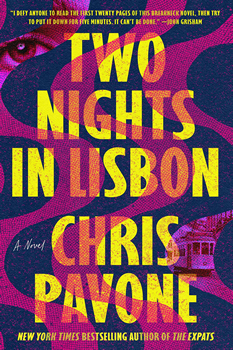 I don’t know how to write a rave review. I’ve never done it before. But New York Times bestselling author Chris Pavone is forcing me to.

Pavone’s first novel a decade ago, The Expats, won Edgar and Anthony awards and a shelf-full of other accolades. His newest novel, TWO NIGHTS IN LISBON, should follow suit. In fact, the publishing industry might consider creating a slew of new awards just for Pavone’s thriller.

TWO NIGHTS IN LISBON is tightly plotted and expertly structured. Pavone masterfully mixes points of view while weaving in backstory and flashbacks as the reader hangs on to this roller coaster of a read. The story has unforeseen twists, and yet nothing feels contrived. Pavone has dug deep and molded complicated characters, slyly unveiling them page by page until you find that nothing is what you expected. His plot is complicated, but in Pavone’s skilled laptop, you never get lost. It’s an easy ride along through to the stunning end.

This is what great writing is about.

TWO NIGHTS IN LISBON begins with newlywed Ariel Pryce traveling with her husband, John, on a business trip to Lisbon. After their first night in the city, she wakes to find John missing. She checks with the hotel and finds he left early in the morning. Being in a foreign country, she then almost immediately visits the American Embassy and the local police. John has been missing only a matter of hours, which means he might not be missing at all, so she is politely, but routinely, dismissed. Well, almost.

He hasn’t been gone five hours and she’s already reporting him missing? What’s with that? Is she some privileged crazy American expecting immediate answers? Something doesn’t feel quite right to the local police, so they assign someone to follow her.

Then a ransom call debuts, and the American Embassy wants in. How will Ariel raise three million in ransom to save her husband? She knows of only one person with that kind of money—her husband’s ex-friend and business associate—a powerful man back in the States with whom she has a hidden past.

“There’s no such thing as a book you can’t put down,” writes bestselling author Stephen King, in reference to Pavone’s book, “but this one was close.” If our world wasn’t filled with bathroom breaks, the need for sustenance and the requirement for rejuvenating sleep, I would find a way to disagree with King.

Pavone says he set his novel in Portugal because it was a hot location among his friends. Everybody seemed to be vacationing there. “I thought there was something to it.” So he visited and found Lisbon was neither large nor expensive and had great weather. “I just loved everything about it. Lisbon is intriguing.”

He even used the hotel on a town square where he stayed as his characters’ fictitious base of operations.

When he wrote TWO NIGHTS IN LISBON during the pandemic, Pavone had more in mind than a fast-paced thriller filled with its share of twists and turns. Working each day out of Soho House, an artists’ club in Manhattan, he created a backstory examining the plight of women in today’s sex-saturated culture where powerful male politicians and media celebrities prey on women with lesser ability to fight back. Until the #MeToo movement, women who had been sexually harassed were marginalized, shunned, ignored, humiliated, ridiculed, and—worst of all—disbelieved. The world had yet to acknowledge much of this partially due to the rampant proliferation of non-disclosure agreements.

Pavone subtly applies these horrors to Ariel’s escalating desperation. In the process, he neither preaches nor tries to drive a cultural wedge. Instead, he uses the freedom of a fictional story to illustrate a moving tale far better than any nonfictional account could ever imagine doing.

“I find it harder to enjoy books that simply pass the time and don’t address the world we live in,” he says. “As a reader, I demand something I didn’t five years ago… I want my books to be relevant to something instead of just a crime puzzle. I’ve never written a Who Done It. Those are not the books I’ve tried to write. I’ve always wanted to write something that is important and relevant to readers.”

“I don’t mean to denigrate anybody’s writing,” he says. “People come to fiction for many things… Part of my goal was to write a story that would surprise people not only on the twists, but what the story was really about.”

Well, he’s done that. Put simply, this novel has a moral sensibility, yet it is subtle enough that some readers may see TWO NIGHTS IN LISBON as only a thrilling read—which it is—without ever encountering its underlying implications. As he says, people come to fiction for different things.

The origins of TWO NIGHTS IN LISBON surfaced nearly 20 years ago when Pavone was editing a cookbook for a major New York publishing house and having coffee with his client, a Food Network star. She was famous. He was not. Every few minutes while they talked, strangers would walk up to their table and interrupt their conversation.

“They felt entitled to impose themselves on our conversation merely because she was there and they could,” he says. “It had never before occurred to me fans could create demands on your life that you didn’t sign up for and wouldn’t enjoy.”

“Some celebrities, that’s what they’re looking for. For the others, the fame is beside the point. For those people, I don’t know how they go through life that way.”

Pavone’s experience led him to explore this sense of entitlement and something more sinister: how powerful men feel entitled to prey on women.

Much of this permission is engrained in our culture and especially in the media, which celebrates beauty and fame. “We’ve convinced young women it’s a goal to pursue,” he says. “That creates a toxic culture for women—all women. It’s always about being ogled or propositioned.

“I felt compelled to examine that in some way.”

Eventually, it became the inspiration for his protagonist, Ariel Pryce. And yet we’re talking thriller here, not what the cognoscenti of publishing will ever admit is great literature. “It’s hard to balance plot twists with deep characters and readability…I don’t want to lose readers because there are too many characters, or it’s too complicated a plot.”

It took Pavone nine months to write his first draft. “I tend to know when I write a book where it’s going to end up, but I’ve been wrong every time.”

The reader of TWO NIGHTS IN LISBON might want to learn from Pavone’s experience, especially if they think they know where this book is going. This, of course, makes it an even more enjoyable ride.

During his writing process, if a beta reader is confused by something, Pavone makes edits for clarity. “If anyone has a complaint about anything, I do something about it.” Although he finds editing exhausting, he says it’s “a big way to smooth out the plot complexities that make it readable to readers…There are some aspects of the final twists that I didn’t see coming when I started the book, but I came up with them along the way.”

Readers probably won’t see them coming either, which makes this such a joy ride.

So if you commence reading TWO NIGHTS IN LISBON very early in the morning, maybe you can prove Stephen King wrong and never put this book down before finishing. And should the publishing poohbahs fail to lavish awards on Pavone—recognizing this for the great read that it is—all will not be lost. The most important people, the readers of TWO NIGHTS IN LISBON, will be handsomely rewarded.

On the Cover: Nancy Bilyeau