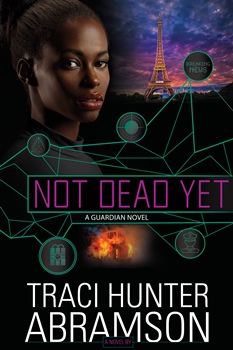 After becoming unwittingly entangled in a group called the Coalition, known for using fake news to generate political unrest in the United States, Cassidy Edgemont was offered a devastating choice: stage her own death and join her rescuers, the guardians, or risk the wrath of the organization she betrayed. She chose death.

As an invisible government operative, Cas has been living in Paris with no complications—until her family pays an unexpected visit to the European city, changing everything. They think Cas is dead, and she has to keep it that way. But when a bomb is detonated nearby and fake news incites riots in the city, Cas recognizes the mark of the Coalition.

Donovan, a fellow guardian, is summoned to join her in Paris in attempt to untangle the intricate web linking Cas’s past with the recent bombings, but as the threat level escalates, Cas must again make an impossible decision: face possible exposure to her family in her race to uncover the truth or risk the loss of innocent lives.

Traci Hunter Abramson recently spent some time with The Big Thrill discussing her latest thriller, NOT DEAD YET:

One of the things I hope readers will take away from NOT DEAD YET is an appreciation for the many men and women who work in intelligence careers who sacrifice for the safety of so many, yet they do so without any recognition and sometimes have to sacrifice a lot to do their jobs well.

I spent six years working for the CIA, so writing government intrigue and international thrillers is a natural fit for my core knowledge base and the plots I enjoy creating.

This book has the action and romance that many readers enjoy while also maintaining a writing style that is friendly to younger readers so that it can be shared among teenagers, parents, and grandparents without concern for anything anyone would deem inappropriate for younger readers.

I was in the middle of writing this book, which has two Black protagonists, at the time when the George Floyd incident occurred and sparked numerous riots around the country. It was an interesting perspective to have people of color suddenly needing to be represented when I was in the process of writing a book that was in essence trying to do exactly that.

Probably one of the books that has influenced me the most is Up from Slavery by Booker T. Washington. I love the general appreciation Washington had for gaining an education and for encouraging all people to become contributing members of society.

Traci Hunter Abramson was born in Arizona, where she lived until moving to Venezuela for a study-abroad program. After graduating from Brigham Young University, she worked for the Central Intelligence Agency, eventually resigning in order to raise her family. She credits the CIA with giving her a wealth of ideas as well as the skills needed to survive her
children’s teenage years. Traci currently lives in Virginia and frequently indulges in her love of travel and exploring new cultures. She has written more than thirty best-selling novels and is a seven-time Whitney Award winner, including 2017 and 2019 Best Novel of the Year.

Fool Her Once by Joanna Elm