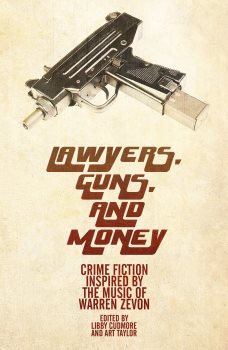 From classics like Werewolves of London, Excitable Boy, and Roland the Headless Thompson Gunner to lesser-known gems across a career spanning nearly four decades, the songs of Warren Zevon are rich with crime and intrigue and suspense—guns and gunners, assassins and drug dealers, a supernatural serial killer, and a heap of hapless losers along the way, too.

ART: LAWYERS, GUNS, AND MONEY is part of what seems to have become a trend in anthologies of crime fiction inspired by music: Johnny Cash, Bruce Springsteen, Steely Dan, even Joni Mitchell, and many more. As a reader of these anthologies even before an editor of this new book, I’ve always enjoyed the stories that not only please in terms of character and plot but also provide some new or surprising perspective on the songs that inspired them. Many of Warren Zevon’s songs offered crime stories in their own right—”Werewolves of London,” “Excitable Boy,” and even the title story, for example—but I hope that readers will feel enriched by how our contributors build in new directions from the foundations they discovered in Zevon’s lyrics. Look at how Dana Cameron turned “Werewolves of London” into a bespoke espionage tale, and Alex Segura’s “Keep Me in Your Heart” centers on a revolutionary group similar to the Weather Underground—completely unexpected in each case but brilliantly done.

ART: Can I twist the question a bit? Adding a plural to that word genre? Even from the two stories I just mentioned, I hope it’s clear that LAWYERS, GUNS, AND MONEY covers a wide range of subgenres under that larger umbrella of mystery and crime: espionage, noir, a hard-boiled detective tale, a story embedded in a killer’s perspective, something ultra-dark here, another story ripe with humor there. I hope our anthology revels in that range—the wider range of our genre, all the possibilities within it.

ART: When I first started courting contributors for the anthology, I was looking first and foremost for writers who were fans of Zevon’s work. William Boyle, for example, mentioned Zevon in an article he wrote about screwball noir—which article was, I hope he’s not offended, the first thing I’d read by William Boyle. But now I know him and his work—and that’s true as well of the writers that my co-editor Libby Cudmore brought to the collection. I hadn’t read anything by Matthew Quinn Martin or Nick Mamatas, for example, before Libby introduced me to them. So yes, discoveries there on a personal level, and nice surprises, and in a larger way, I think that’s one of the great things about anthologies in general: You might be drawn in by a contributor or two whose work you follow, but you’ll also have the opportunity to find others you haven’t read—and follow their work further.

Libby Cudmore is the author of the hipster mystery The Big Rewind (William Morrow, 2016) and the Martin Wade PI series at Ellery Queen Mystery Magazine. Her work has appeared in Tough, The Big Click, Big Lucks, Stoneslide Collective, and the anthologies Hanzai Japan, Welcome Home, Mixed Up, and A Beast Without a Name: Stories Inspired by The Music of Steely Dan. She is an associate editor at Rock & A Hard Place.

Art Taylor is the author of The Boy Detective & The Summer of ’74 and Other Tales of Suspense. His fiction has won the Edgar, Agatha, Anthony, Macavity, and Derringer Awards, and he previously edited Murder Under the Oaks: Bouchercon Anthology 2015, winner of the Anthony Award for Best Anthology or Collection, and California Schemin: Bouchercon Anthology 2020. He is an associate professor of English at George Mason University.

The Master Mind by Mark Schorr

The Sleepers by K.M. Kelly