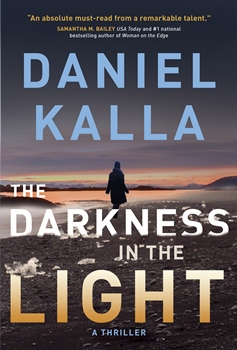 A psychiatrist’s patients are dying—are their suicides related to a new antidepressant, or is there something even more sinister going on in the northernmost town in the US?

After an Alaskan psychiatrist loses one young patient to a presumed suicide, he’s determined not to lose a second when she goes missing, too. He flies from Anchorage to Utqiagvik—the northernmost town in the Western Hemisphere—to investigate her disappearance with the help of a local social worker there. But what begins as a missing persons inquiry and suspicion over a pharmaceutical cover-up quickly evolves into a terrifying journey of treachery and death—one that will horrify this isolated community and endanger many more lives.

Daniel Kalla recently spent some time with The Big Thrill discussing his latest thriller, THE DARKNESS IN THE LIGHT:

The setting. I was desperate to write a Nordic noir style psychological thriller, as I’m a huge fan of the genre. For that, I needed to set it somewhere remote and exotic. And I think I hit on the perfect setting—the town of Utqiagvik, Alaska. It’s the northernmost town in the Western Hemisphere and can only be accessed via air. Unfortunately, I could not visit the town as I was writing this novel at the peak of COVID with all its air travel restrictions. But I still kind of fell in love with the town through my extensive online research and all I read and saw about it.

Almost everything surprised me in this novel. When I started, all I knew was that I had one major—and hopefully original—twist in store for the readers. The killer, many of the victims, and even the ultimate hero all came as a happy surprise and revelation to me as I was writing the first draft.

This book has the biggest twist of any mystery thriller I’ve ever written. In fact, the twist inspired the whole novel. I wanted to surprise readers in a way I’d never seen done in a story before. And hopefully the readers haven’t either. And you can be the judge of whether I pulled it off or not.

Born, raised, and still residing in Vancouver, Daniel spends his days (and sometimes nights) working in an Emergency Department in a downtown Vancouver teaching hospital. Daniel is also the author of twelve published novels, which have been translated into thirteen languages. He has had multiple novels optioned for film, and his Shanghai trilogy is being developed for a TV series.

Daniel received his B.Sc. in mathematics and his MD from the University of British Columbia, where he is now a clinical associate professor and the department head of a major urban ER. He’s the proud father of two girls and a poorly behaved but lovable mutt, Milo.