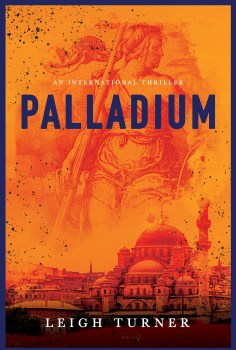 PALLADIUM introduces John Savage, a British spy thrown out of MI6 for gross misconduct in Moscow.

In Istanbul, armed men seize Savage’s lover, archaeology professor Elif Mutlu, along with the Palladium, a talisman said to have protective powers. Savage must work with Orhan, Elif’s macho intelligence cop brother, to track down Elif and stop fanatics killing seventeen million people in the turbulent mega-city whose success is a symbol that East and West can live together. Elif must resist, and conquer, her captors. Part I of the novel includes flashbacks to the siege of Istanbul in 1453.

In 2011, I visited Istanbul. At the time I was British Ambassador in Kyiv, Ukraine. Gulls swooped over the Bosphorus; the great dome of the Aya Sophia caught the sun; the throb of giant tankers echoed from waterfront yalis. Great ocean steamers lined the strait. I thought, I must write a thriller set here.

The character of the disturbed former MI6 spy, John Savage, thrown out of British intelligence for gross misconduct in Moscow, already existed from my unpublished thriller A Killing in Sevastopol. I thought he would fit right in in Istanbul.

I love reading thrillers. My career as a diplomat and ambassador has taken me all over the world, introducing me to fascinating places, amazing people, and bizarre situations. I worked for years on counterterrorism and crisis management, handing real terrorist incidents. I know this stuff.

I had previously written a thriller set in Berlin, Blood Summit (2017) and two other unpublished thrillers. I was keen to see some of the same characters appear in PALLADIUM.

The biggest challenge was to complete the book during the hectic schedule of being an ambassador. Where to find the time? Plus, my employers were not always keen on me writing or publishing novels!

The biggest opportunity was my posting to Istanbul as British Consul-General from 2012-2016 when I was able to immerse myself in this mysterious, ancient city.

I was fascinated to learn more about the legend of the Palladium—a mythical object thrown out of heaven by Zeus and kept in the temple of Athena in Troy, where it protected the city from the Agamemnon, Achilles, and the Greek army for ten long years. Only when Odysseus and Diomedes stole the sacred object did Troy fall. But what happened to the Palladium then?

I was also fascinated to research the 1453 conquest of Constantinople that features in the first part of the book.

You will find the woman with the hardest head in the world, who fights against injustice and captivity to the end. You will find a threat so horrific—yet real—that you will think, Could that really happen? You will find love, broken hearts, and redemption.

I am a huge fan of Dan Brown, Lee Child, Terry Hayes, Tom Clancy, Michael Crichton, and Robert Harris. All of these writers produce gripping, page-turning thrillers that leave the reader breathless until the last page. My goal is to do the same.

Q: Could the horrific form of terrorist attack that threatens millions of people in one of the world’s great cities in “Palladium” really happen?

Leigh Turner is a writer and former British ambassador to Ukraine and Austria. He grew up in Nigeria, Lesotho, Swaziland, and Manchester, England and attended Cambridge University.

Leigh’s books include the Berlin thriller Blood Summit, his satirical thriller Eternal Life and his darkly comic Seven Hotel Stories. His Istanbul thriller PALLADIUM will be published in May 2022.

Leigh’s diplomatic handbook, The Hitch-hiker’s Guide to Diplomacy, will be published in spring 2023. You can find out more about him at his rleighturner.com blog.

When You Leave Me by Susan Wingate