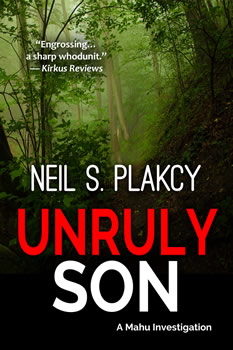 In Neil S. Plakcy’s UNRULY SON, a mother and her neuro-diverse teenaged son are missing in one of the parks surrounding Honolulu. Homicide detective Kimo Kanapa’aka must use his knowledge of the landscape and of human nature to solve the case. As pressure mounts from civic and tourism leaders, as well as the news media, Kimo must confront old adversaries as he negotiates tricky questions. What does it mean to be a parent? How can you protect your children while at the same time preparing them to be free someday?

This is Plakcy’s 12th book in the Kimo Kanapa’aka series. What keeps him coming back to this character?

“Coming out is a process,” Plakcy explains, “not an event. I realized after writing Mahu that I could continue Kimo’s personal story, framing each step along the way with a case to investigate. He’s gone from a closeted cop to one who is fully out, building a cadre of gay friends, finding and committing to a partner, taking in a dog, then a foster son, then finally donating sperm to a lesbian couple and becoming a father. I keep coming back to Kimo to see how he continues to evolve. I hope that’s what readers like, too.”

We asked Plakcy to talk about the importance of putting gay characters—and non-traditional families—front and center in this series.

“There are actually a wide range of gay male protagonists in crime fiction,” he says. “From cozy amateur sleuths to hard-boiled private eyes to intense police detectives. The problem is that these books are coming from small publishers or self-publishing. There was a brief time in the 1990s when St. Martin’s Press had a gay imprint, Stonewall Crime, but since then, mainstream publishing has all but abandoned this niche. A quick check on Amazon shows hundreds of titles in the Mystery=>LGBTQ+ Mystery category. So the issue is moving the best of these authors and titles into the mainstream, to keep up with changing attitudes in the reading public.”

A neurodiverse boy is missing in UNRULY SON. How did Plakcy make sure he got things right when it came to his character, actions, and dialogue?

“One of my closest friends is a school psychologist who has spent decades with this kind of child, and over the years I’ve learned a great deal from her. While writing this book, I periodically called or emailed her asking for advice. But in the end, he’s my character and my responsibility. I hope that I have represented him in an honest way.”

UNRULY SON is a short book. How much does Plakcy consider page length, or word count, when he starts on a new novel. Does he outline?

“I had problems with the length of this book,” he says, “because it ended up being about a small set of characters, unlike many of my other mysteries, where I can keep introducing new suspects and motives. I prepare only the most rudimentary outline—what’s the first plot point, pinch point, midpoint, etc. Then I work toward those. In my first draft, I’m focused on figuring out and telling the story. On the next draft, I go back and salt in descriptions, references, and clues.

“At the same time,” he says, “I have an idea of what’s going on in Kimo’s life and how that reflects on the story. For instance, a few books ago, he and his partner took in a foster son. In this book, the young man is 22 and a college graduate; his mother, who has been in prison, wants to get back in his life. So the theme of mothers and sons plays out that way. I didn’t realize that was so important until the second draft.”

Plakcy lives in Florida. What attracted him to set this series in Hawai’i?

“I fell in love with Hawai’i 30 years ago after a visit,” he says, “and I sought out crime fiction set there. There wasn’t much, so in an act of hubris, I decided to write the book I wanted to read. There are many similarities between Miami and Honolulu—the mixing of cultures, the relentless sunshine, and the accompanying shadows, where dark deeds can happen, and the sense of living at the edge—of a country, of an island. I often say I’m writing about Florida but with a Hawaiian overlay. That being said, I do a lot of research on island people, attitudes, and language.”

We talked to Plakcy about the process of self-publishing books. What are the pros and cons of going this route?

“The cons are the easiest to describe,” he says. “You have to be your own publisher and handle all the business and production and marketing. Many authors aren’t up to that—but I have a relatively unique combination of an MBA and an MFA, so I love it. Another con is that it’s hard to get attention for a self-published book. It’s almost impossible to break into the big review publications or wire services.

“The pros are pretty simple, too,” he says. “I make a lot more money per book than I ever did in traditional publishing. Mahu originally came out in trade paperback at $19.95, and I made about 75 cents per copy. Today the e-book is for sale at Amazon at $3.99, and I make about $2.80 a copy. Even for a new book, when I’m paying for developmental editing, cover design, proofreading, and marketing services, I’m able to break even quickly. Plus, I get full control over everything, which I like.

“The most important point,” Plakcy says, “is that I am writing in many cases for a niche audience that trade publishing doesn’t think is big enough to bother with. I love hearing from readers who see themselves and their experiences in the books.”

Finally, if Plakcy could put together his dream panel for ThrillerFest—participants need not be living to be invited (why discriminate?)—who would be on the panel, why, and what would the topic be?

“Until relatively recently,” he says, “gay characters in crime fiction were restricted to villains and psychopaths, and they came to bad ends. Gore Vidal and Patricia Highsmith began to turn that around, so I’d invite them. Then Joseph Hansen, who in 1970 published Fadeout with Harper & Row, a pioneering mystery with a gay detective who was well adjusted and successful at crime solving. Then I’d bring in John Morgan Wilson, who won the 1996 Edgar for best first mystery novel for Simple Justice, the first book with a gay protagonist to win that award. I’d love to talk to all of them about the progress that has been made in the genre to date.”

Neil S. Plakcy is the author of over fifty mystery and romance novels, including the best-selling golden retriever mysteries and the highly acclaimed Mahu series, a three-time finalist for the Lambda Literary Awards. His stories have been featured in numerous venues, including the Bouchercon anthology Florida Happens, Malice Domestic’s Murder Most Conventional, and several Happy Homicides collections.

He is a professor of English at Broward College in South Florida, where he lives with his husband and their rambunctious golden retrievers.