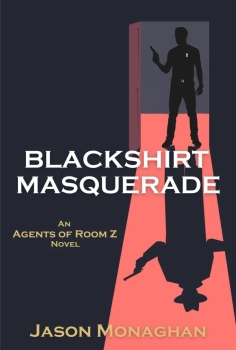 London, 1935, and the Blackshirts of the British Union of Fascists are on the march. Disgraced army officer Hugh Clifton is recruited by MI5 to infiltrate the Blackshirts, but unwittingly becomes a hero of the movement. Drawn into street battles against communists, he uncovers a plot to bring mayhem to Britain and undermine the government. He is being watched by the sinister fascist intelligence unit Department Z and decides the best way to beat them is to join them.

Period setting. I was intrigued by how the British Blackshirts failed to share the success of continental fascist parties and wondered how it could be different.

Writing historical novels allows me to have an adventure in the past.

Views of the Blackshirts are very stereotyped, which gave me an opportunity to portray the movement with a subtlety that hasn’t been done before. As they were shunned after the war, few of its members wrote honest accounts of what the movement was up to in the 1930s, making research difficult.

I was surprised how amateur the British intelligence services were, which gave a lot of scope for building the plot. I was also surprised how close some intelligence officers were to the fascists and by suggestions that they actually worked together.

There is quite a lot of humor in the book at the expense of the strutting pretensions of the fascists and the snobbery of British society in the 1930s.

Jason Monaghan trained as an archaeologist, but his career has featured twists including working in the prevention of money laundering, raising shipwrecks, and being the director of a museum. His background inspired his five archaeology-detective novels, and his love of history led him to create the new Department Z series. He now lives in Yorkshire, UK.