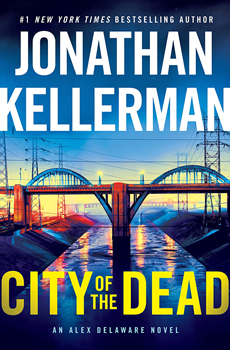 A naked man is found dead on a Los Angeles street, apparently at first an accident victim run over by a truck. But then a trail of blood from the body leads to a nearby home where a woman has been brutally murdered. And the dead woman turns out to have a controversial past filled with lies and deception.

That all happens in the explosive first pages of CITY OF THE DEAD—Jonathan Kellerman’s new thriller in the hugely popular Alex Delaware series.

“I spend a lot of time thinking about a new book before I begin writing it,” Kellerman says when asked how he came up with such a gripping and unique opening. “Slowly ideas materialize and seem to refine themselves. After three decades, I still find it an intriguing and mysterious process.”

Did Kellerman know what the shocking ending to the book would be when he wrote those opening pages?

“I did,” he says. “Prior to writing, I construct several outlines, progressing from general to specific, and end up with a chapter-by-chapter concoction that helps me structure the novel. That said, I frequently compare the finished project to the outline, and they’re often quite different. I may think I know where I’m going, but the route changes.”

Still, when asked why he thinks the Alex Delaware books are such fan favorites and perennial bestsellers, Kellerman says it’s about more than just the story.

“While I spend a lot of time plotting, readers tell me that what they love the most are the relationships among the characters,” he says. “They also seem to appreciate being offered a window into the world of psychology and, finally, the LA sense of place is seductive.”

There’s also the fascinating friendship between psychologist Delaware and Detective Milo Sturgis, who is gay. It began in the first Alex Delaware book When the Bough Breaks—which went on to be an overnight bestseller and a TV movie—and their partnership has continued to delight readers ever since.

“Back in 1981, when I began writing When the Bough Breaks, I thought having a gay man and a straight man as best friends would be a fascinating and revolutionary concept,” Kellerman says. “Also, I was a straight man with gay friends, so why the hell not? I felt then, as I do now, that while we Americans are a great bunch, sometimes we get overly hung up about what people do in bed.”

Kellerman, of course, was a prominent clinical psychologist himself for a number of years before he began writing full-time. So how much of himself does he see in Alex Delaware—and does he draw on his real-life experiences in the medical world for the books?

“I struggled to get published until I figured out—duh!—write what you know,” he says. “I’d had fascinating experiences as a psychologist, including working within the legal system.  Obviously, ethics prevented me from writing about patients, nor would I want to do so.  But the experience base helped me write about the world of clinical psychology accurately—something that continues to be extremely rare.”

After years of trying to write fiction at the same time he was working long hours in his career as a psychologist, he says he was stunned by the overnight success of When the Bough Breaks, the first Alex Delaware book.

“I got paid the equivalent of three bucks an hour to write that book. That, after struggling for over a decade to get published,” he says. “I was fortunate to have a successful practice and figured I couldn’t afford to take time to write too many novels because I had so many patients to help, plus a young family to feed. Then it became a bestseller. Both my publisher and I were astonished. So I said, ‘Hmm, maybe I’ll try another.’  And it, too, hit the lists. So I wrote a third. Etc., etc.  It took five bestsellers before I was comfortable thinking of myself as a writer.  During the time I wrote those books, I was in full-time practice and working on fiction from 11 p.m. to 1 a.m. in an unfinished garage.”

CITY OF THE DEAD is the 37th Alex Delaware book. Does Kellerman think Delaware has changed much over the course of the series? “I have no idea as I rarely look back at the older books unless I’m fact checking,” he says. “My son and co-author, Jesse Kellerman, tells me the novels have grown a tad less descriptive and a bit more impressionistic. He’s a smart guy, so I believe him. I’d welcome readers comments re: this.

“I’ve chosen not to age him in real time. When the series began, we were the same age. He continues to enjoy the blush of youth, and I’m 72. Fortunately, I feel like a kid, possibly due to genetics, as my mom will be 102 in January.”

Kellerman’s wife Faye is also a popular and bestselling author. Kellerman has written books with his oldest son, Jesse—a well-known novelist and playwright. And his daughter Aliza co-wrote a book with her mother too. So the Kellermans are really a writing family, which he says makes his own career as an author easier.

“It’s worked out great as this is a strange job, and having loved ones who really understand the quirks of novel-dom—e.g., getting up in the middle of the night to polish a paragraph, obsessing on a fictional human being, bemoaning the vagaries of the publishing business—is fantastic,” he says.

He also talked about some of the other books (both fiction and non-fiction) that he’s written in addition to the Alex Delaware series.

“Every so often, I venture out into the non-Delaware world. The first time was my fourth novel, The Butcher’s Theater, a thriller set in Jerusalem, a city I love and where Faye and I maintain a residence. Faye and I collaborated on two double novellas, and Jesse and I have written two ‘Golem’ novels as wells as the continuing series featuring Clay Edison, a coroner’s investigator working in northern California.

“There have been other ‘standalones’ featuring Detective Petra Connor, who also appears in the Delaware novels; The Murderer’s Daughter featuring the enigmatic and brilliant psychologist Grace Blades; The Conspiracy Club, featuring the enigmatic and brilliant psychologist Jeremey Carrier, working in an anonymous Midwestern city. I’ve written a few books on child psychology and one on vintage guitars—a passion of mine.”

Like everyone else, of course, his life has been changed by COVID in the past year and a half—but there are no references to the pandemic and all that comes with it (masks, vaccines, political debate etc.) in CITY OF THE DEAD.

“My job is to entertain, and that means directing people away from all that stuff,” he says. “As such, you will never see mention of any of it in my books. Obviously, this has been a tough time for all of us. I’ve dealt with it by hanging with my beautiful, brilliant wife and writing.”

What’s next for Kellerman?

“The Delaware following CITY OF THE DEAD is complete, as is the one after that. COVID creativity. Faye and I just got back from an amazing month in Jerusalem, after trying for quite some time to get there. Now I’m back in LA, and sooner rather than later, I’ll be thinking about the next book.”